Netflix announced today the launch of a cheaper mobile plan for its customers in India. The new subscription plan costs ₹199 (~$2.88) per month, making it the cheapest tier among the streaming service's current suite of premium offerings in the country. 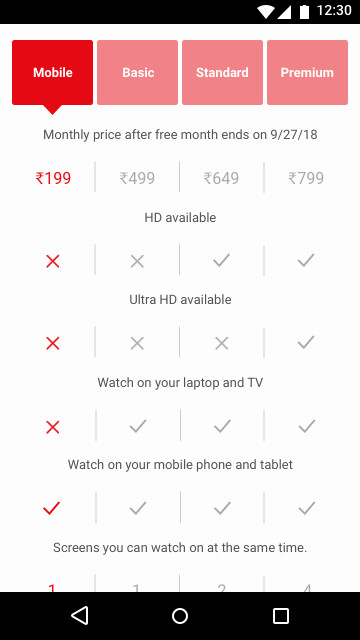 The mobile plan is available on smartphones and tablets in standard definition. Of course, only one device can stream at a time. The good news is that it will be free for new members during the first month.

Regarding the latest subscription tier for the Indian market, Ajay Arora, Director of Product Innovation at Netflix, said:

“Our members in India watch more on their mobiles than members anywhere else in the world- and they love to download our shows and films. We believe this new plan will make Netflix even more accessible and better suit people who like to watch on their smartphones and tablets—both on the go and at home."

Today's announcement follows Netflix's unveiling of a lower-priced mobile tariff for India, set for launch in the third quarter of this year. The company aims for that cheaper option to boost the number of new subscribers in a country where it struggles to hit its target growth. In its recent quarterly earnings report, Netflix revealed that its subscribers grew by only 2.7 million users, missing its target of 5 million for the second quarter of 2019. It remains to be seen whether its cheaper mobile plan in India will help bolster its growth next quarter.