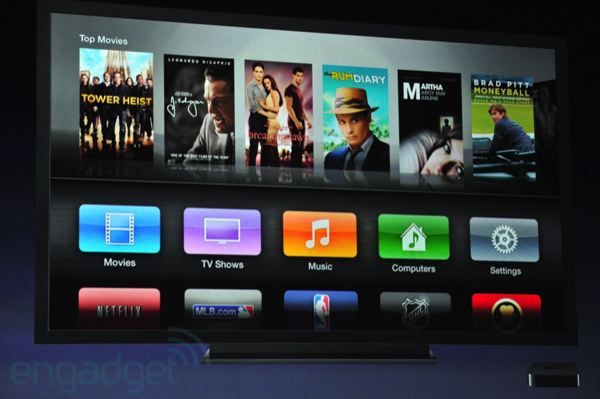 While Apple is making announcements about its next iPad product today, the company used its latest press event in San Francisco to reveal a new version of its self-proclaimed "hobby" product, Apple TV. As reported by Engadget, the company states that the new version will go on sale March 16 for $99, with pre-orders scheduled to start today on Apple's web site.

As you can see in the above photo from the press conference, Apple TV will get a new user interface that will also support more third party apps. The biggest change is that the new version of Apple TV will support 1080p resolution, a welcome feature for all of those folks who have big screen televisions.

Compared to the tens of millions of iPhones and iPads that Apple sold in 2011, the Apple TV is something of a slow turtle in terms of unit sales. In January, Apple CEO Tim Cook said that the company sold just 1.4 million Apple TV boxes in 2011. It remains to be seen if this new version, with the new UI and its support for 1080p resolution, will be more popular among consumers who already have a number of choices in the TV set-top box category.