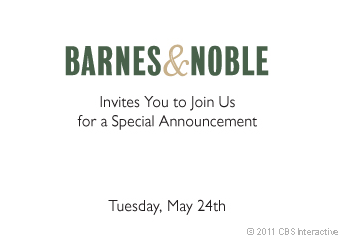 Barnes & Noble, today, sent out invitations to several media outlets to an event taking place next Tuesday, May 24th. The event will be held at the same New York City Barnes & Noble store where the Nook Color made its debut just last year in October. For now, an unveiling of a new Nook device is just speculation, but an SEC filing from the bookseller earlier this month basically confirmed the date and that the product would be a new ereader.

Currently, Barnes & Noble offers its Nook in two flavors: the touchscreen Nook Color priced at $249 and the standard eink model priced at $149. The latter, while in features is closer to the Amazon Kindle, is a bit behind in terms of pricing — the Kindle recently had a price cut, now starting at $114.

Little is known about what features a new Nook device would sport, but CNET is placing its bets on the device being a successor to the original Nook. That is to say, they're expecting an eink device that's "compact, lower-priced, [and] monochrome" to compete with the Kindle. But a filing Fission LLC, Barnes & Noble's front company, shows they registered the phrase "The simple touch reader," most likely as a slogan to use for the new device due next Tuesday.

A touchscreen eink reader would definitely be a step up from Amazon's Kindle, but certainly not a first.