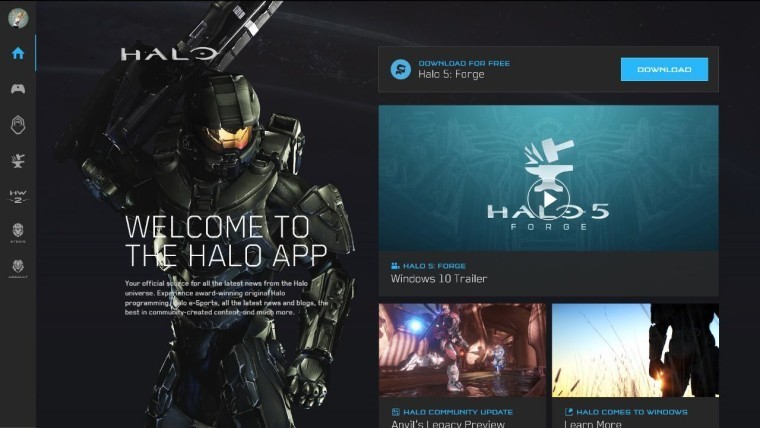 343 Industries is having one heck of a day for Halo. We reported a while back that Xbox's most prized franchise was going to get both a new official app and a full port of the Forge map editor from Halo 5 for Windows 10. Both of those apps are live on the Windows Store today as well as a new set of free DLC.

Looking at the Halo app, Microsoft and 343 have created a one-stop access point for all things Halo. When using the app on Windows 10 you'll be able to access lots of content that touches on current and upcoming Halo titles. Things like the Halo Championship Series, community updates, and more can be checked on. Users will be able to see all games available for Windows 10 as well, serving as an easy-to-access download portal for other Halo games like Spartan Strike and Spartan Assault.

As for the Windows 10 app Halo 5 Forge, there's a lot to look at. First of all, it's a 32GB download so make sure you have plenty of space on your primary storage device before installing. Halo 5 Forge on Windows 10 is a full port of the Halo 5 level editor found on Xbox One. While you won't be able to play all of Halo 5: Guardians on your PC, you can at least have some fun with the Forge editor online since it allows custom matches to be played over PC and can publish created levels to your Xbox One. The Windows 10 Forge editor also bumps up the graphics of Halo 5 and can be played at 4K resolutions, though the power requirements are a bit hefty and requires the Windows 10 Anniversary Update.

Finally, Halo 5: Guardians receives another round of free DLC today. Continuing the trend of free DLC for Halo 5, Anvil's Legacy is the ninth set of DLC brought to Halo 5 since the game launched last year. The update offers two new maps to play on. Mercy will expand the Arena playlist maps offerings - a maps that looks like some kind of cross between outer space and an Elder Scrolls prison. Temple is the new Warzone map for large-scale multiplayer and follows a familiar ancient desert theme found across numerous Halo titles. There will be multiple new sidearms and heavy weapons and skins unlocked through Halo 5: Guardians' REQ System.