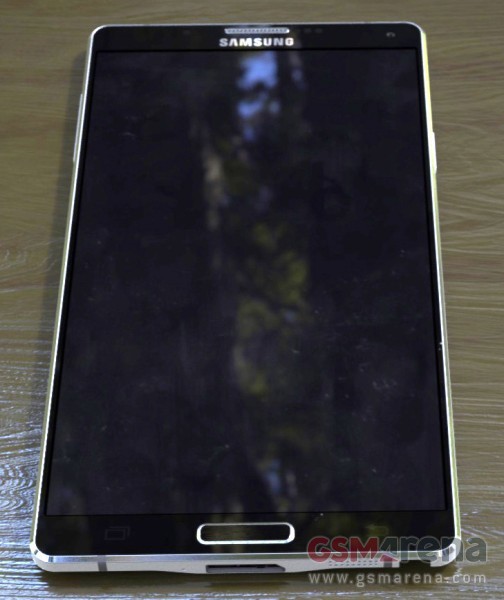 It is no secret Samsung's new Galaxy Note 4 will be a beast: It is expected to have a 5.7" Quad HD display along with a Snapdragon 805 processor clocked at 2.5 GHz (though it will be replaced by Samsung's own Exynos 5430 chipset in some markets), 3 GB of RAM and a 16 MP rear camera with OIS, along with a 4 MP front-facing camera. What's more, it will be powered by the Adreno 420 GPU which will offer a noticeable difference in some tasks compared to the Adreno 330.

Regarding its release, Samsung recently scheduled an event for September 3 and it is highly probable that the Galaxy Note 4 will make its debut during IFA in Berlin; the press invites for the event were sent earlier this month.

Until now, the details known about the handset were the specifications and the announcement date. Thanks to an anonymous user at gsmarena, some (sort of) high quality images of the upcoming Galaxy Note have been leaked.

Although the back of the device seems to be made of plastic like its predecessor, the main upgrade here is a metal frame surrounding the device. This kind of frame installment was expected to come with the Galaxy Alpha and it seems like Samsung decided to utilize this on a different model as well. Apart from the frame, an USB 3.0 port can be clearly seen on the bottom; heart monitoring feature is also said to be included.