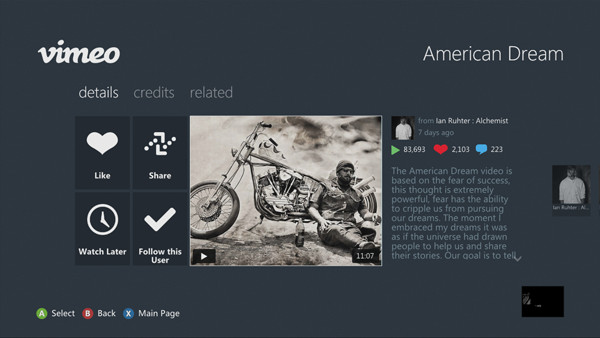 Last week, Microsoft announced it was going to add over 40 new streaming media apps to its Xbox 360 console over the next several months. This week, the company launched several of these promised apps, including four in the U.S.

Major Nelson has the details of what's being added this week. For the U.S. market, Xbox 360 owners with paid Xbox Live Gold service can check out the new Vimeo app, allowing users to access the many user generated videos uploaded to the popular service. The official Vimeo blog has more information on the new Xbox 360 app, which also supports voice and gesture commands if you own the Kinect add-on hardware.

Other new apps added to the Xbox 360 this week include AOL On and the indie film service SnagFilms in the US. The Japanese anime video app Crunchyroll will be available in all Xbox Live markets this week, with the exception of Japan, UAE, Slovakia and Saudi Arabia. Azteca is launching for Mexican Xbox 360 owners, and people in Denmark, Finland, Norway, and Sweden and now access Viaplay on their Xbox 360. The IGN video service is also expanding this week to cover Australia and New Zealand.

Finally, U.S. users of the previously released Verizon FiOS app for the Xbox 360 will get an update this week that adds a whopping 49 new cable channels for FiOS subscribers, bringing the total number to 75.