We are frequently reminded by police and security advisors of the need to be cautious when using our lovely, shiny smartphones in public, for all around us are those that covet our precious devices, and have no qualms about stealing them. But while pressing home the need for diligence, authorities and technology companies are also doing their bit to ensure that devices become less attractive to thieves, and new measures are on the way to Windows Phone and Android handsets with that objective in mind.

Today, Microsoft announced that it will implement new anti-theft features into Windows Phone, as part of the CTIA's Smartphone Anti-Theft Voluntary Commitment, to which it signed up in April. The company will introduce a range of new capabilities to Windows Phone handsets ahead of the group's target of July 2015. 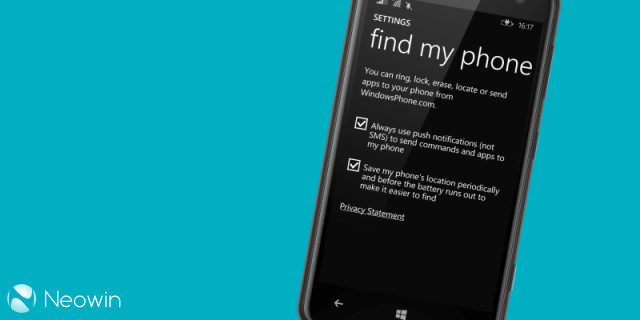 The new features will extend the existing 'Find My Phone' functions with the ability to remotely erase all personal data from the handset, as well as making the device completely inoperable, except for calls to emergency services. Additionally, users will be able to fully prevent reactivation or setup of the handset, but will also be able to manually restore functions to the phone if desired - for example, if the device is subsequently found after being deactivated - including the ability to restore data to the handset from cloud back-ups.

Microsoft will enable the new feature on all Windows Phone 8 and 8.1 handsets via a future update. However, the company does warn that this will be subject to carrier and manufacturer approval.

The feature will bring Windows Phone in line with similar functions in Apple's iOS, and as Bloomberg reports today, Google will also be implementing it in future versions of Android. The office of the New York Attorney General, Eric Schneiderman, said today that robberies involving Apple products had dropped by 19% in the first five months of the year, following Apple's introduction of anti-theft measures in its devices in September, with drops of 38% reported in San Francisco and 24% in London.

Schneiderman said that "the statistics released today illustrate the stunning effectiveness of kill switches and the commitments of Google and Microsoft are giant steps toward consumer safety."