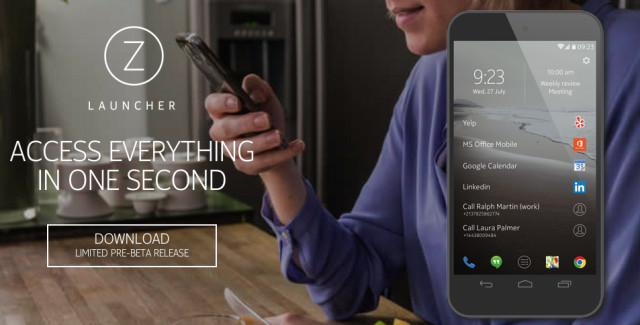 Nokia has launched a new home screen replacement for Android. The company claims that Z Launcher will give users the power to access their information and apps in the fastest way possible.

The Android home screen app is able to accomplish this by dynamically changing the most frequently used apps throughout the day. Z Launcher is also able to include your contacts and frequently visited websites into the mix making it a complete and robust experience. This is all done locally and does not require a connection to the internet.

If Z Launcher does not offer the apps you are looking for, you can easily bring them up by accessing a feature called Scribble. Scribble works by just drawing the first letter or two of the app or contact you want to access and instantly brings you to the proper selection. This virtually eliminates the need to tap, scroll, and hunt for the application or contact you are searching for.

Z Launcher is currently in an alpha stage and is available as a special download through an Android browser. Those that want to try the new home screen will have to have a device running Android 4.1 or newer.

Nokia says that the "Z Launcher is currently optimized for popular devices including Nexus 5, Galaxy S5, S4, S3, Moto X, HTC One and Sony Xperia Z1". We've also managed to get it running on some other handsets, such as the Sony Xperia T, as well as the Nexus 7 tablet, but be warned that it does not support rooted devices.

Source: Nokia | Image via Nokia
This article was updated after publishing to add details about device compatibility.