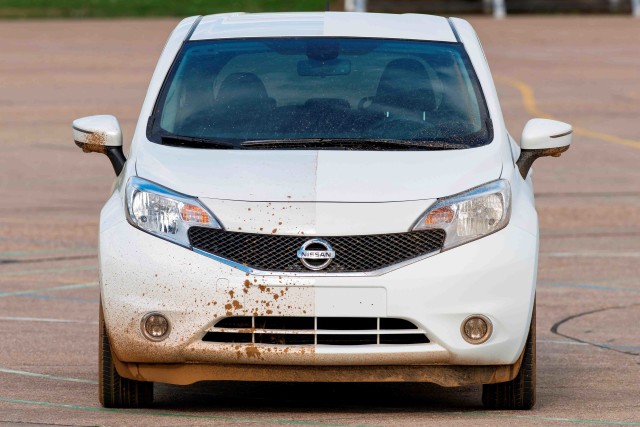 Nissan has never been shy about releasing vehicles that offer something different in comparison to its competitors. At the Nissan Technical Centre Europe, Nissan has begun testing a hydrophobic and oleophobic paint technology that will repel water, dirt, mud, and oil. UltraTech International Inc, has supplied Nissan with its Ultra-Ever Dry technology to conduct its tests. UltraTech International’s technology can be applied to a wide variety of items and it is currently only available for industrial use.

Currently, Nissan is testing the effectiveness of the paint technology by applying the protective layer to a prototype Nissan Note. The protective layer will go through months of tests to see how well it can withstand day-to-day driving. So far, the tests look positive, as it has responded well to some of the more intense elements like sleet and frost.

Nissan claims that this prototype is the first “self-cleaning” vehicle, but in reality it offers a technology that will provide better paint protection and minimize car washes. While there aren’t any specific details about Nissan’s formula for the Ultra-Ever Dry technology, in its publicly offered state it lasts up to a year without re-application. The product also has limitations, as it cannot be applied to darker colored vehicles because it creates a hazy translucent look.

While there doesn’t seem to be any plans to bring this technology to current models, it is a technology that Nissan is willing to explore and possibly offer on future models as an option.