Rumors of Nokia and AT&T pairing up to sell Windows Phone devices has been all but confirmed by the two companies. If you needed more evidence that the two will be offering up phones in the near future, take a look at next weeks AT&T dev conference in Las Vegas. 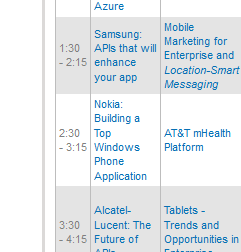 On the scheudle for Monday, January 9th from 2:30-3:15, Nokia will be speaking at the AT&T dev event about creating Windows Phone applications. The event is as stated:

Mobile devices and applications have become a natural extension of their users, and as such, consumers now demand showcase experiences from the apps they use on a daily basis. Have you ever wondered what the secret sauce is that differentiates typical apps from breakout successes that provide truly unique experiences? Does your application exhibit “wow factor” functionality that users can't seem to live without and show off proudly to their friends and family? The Windows Phone Mango platform allows developers to easily unlock the full potential of their product. Showcase apps take full advantage of these unique capabilities by leveraging Live Tiles, deep linking, OS integration, localization, and background processing. When used in conjunction with a well thought-out application design and the Metro UI design language, end-users are left with a satisfying experience that just feels right. When finished, you will have gained pragmatic guidance based on real-life examples on how to create a true showcase application.

It becomes clear that if Nokia is speaking at an AT&T event about creating Windows Phone applications, the two must be launching a device in the very near future. While there is not direct evidence here, it would suggest that the Lumia 900 rumors of launching next week become more plausiable.

Is this ground breaking new information? Hardly, rumors of AT&T and Nokia pairing up have been around for some time, but this is another drop in the bucket that builds the case that Nokia and AT&T will be launching a new device in the very near future.