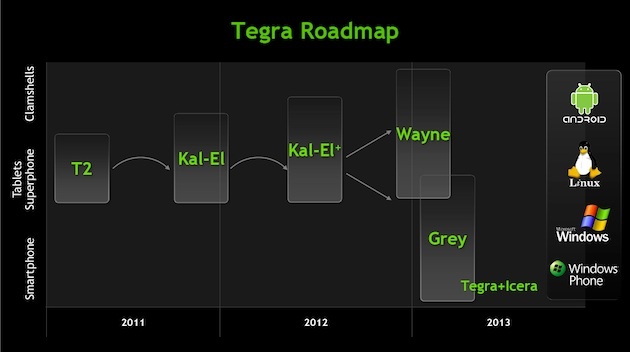 NVIDIA has been making great strides in its mobile processor business of late. In fact the company recently predicted that revenues from its mobile chip division will go up to $20 billion by 2015. Currently NVIDIA has its dual core Tegra 2 processor inside a number of Android-based smartphones and tablets. However, PC Magazine reports that NVIDIA has a road map for future versions of the Tegra family that goes up to 2013.

The road map was presented by NVIDIA at last week's Citi Technology Conference. It shows that the next version of the Tegra processor is the previously announced quad-core chipset code named "Kal-El". The first tablets with Kal-El inside are expected to be released by the end of 2011. Smartphones with the chip should start appearing in the first quarter of 2012. The road map shows that 2012 will also see the appearance of a chip that's called Kal-El + which should be faster than the regular version.  Finally in 2013 yet another Tegra chip with the code name "Wayne" is shown on the current road map. Off to the side of the Tegra generation is a separate mobile chipset code named "Grey". This processor is being made for low powered and smaller smartphones.

While NVIDIA's Tegra chips are usually in Android-based phones, the road map shows that NVIDIA would also like to see the processor run other operating systems such as Linux, Windows and Windows Phone 7. At the moment, Microsoft requires that any Windows Phone 7 device have chipsets inside made by rival Qualcomm but NVIDIA clearly has hopes that it can convince Microsoft to change its policy.