If you don't know who PopCap are, then rest assured you probably know of at least one of their games. They are the people who have given us such addictive classics as Bejewelled and Peggle, as well as award winning smash hits like Plants vs. Zombies. iOS owners have enjoyed many of these games for some time, while android owners felt left out and neglected - until today. 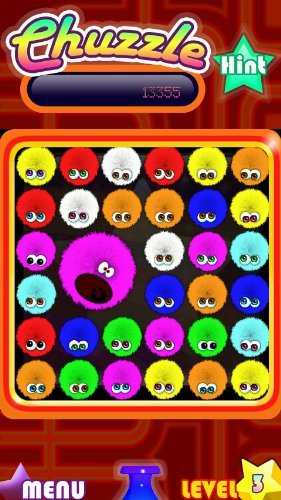 Today, they've released a game called Chuzzle onto the Amazon Android Market and for today only, it's free. Here's the blurb:

Arrange rows of Chuzzles so at least three colors of Chuzzles match, and watch them pop off the screen, racking up your score. Color-match the Giant Chuzzles, the Rainbow Chuzzels, and the Super Chuzzles for uproarious fur-flying fun and bonus scores. But watch out for Puzzle Locks and other ploys that can block your next move. Puzzle Locks freeze the row they appear in, making it really difficult to match nearby Chuzzles. Break free to boost your score with colorful cascades and combos. Every level offers three new patterns and more complex arrangements.

If that doesn't sound like your thing, then don't worry - Plants Vs Zombies will be making its way to the Amazon app store later this month and PopCap have previously teased us with Peggle, so expect that in the near future as well.

It would appear as though, at least for now, PopCap is remaining exclusive to the Amazon App store, which is unfortunate for many as the Amazon store is currently U.S. only - but fear not, it's possible to access the Amazon app store from outside the US. Paul O'Brien of Modaco has written up a detailed, easy to follow guide on accessing the Amazon store from outside the U.S. He has even split up his guide into an "easy" route for if you're just interested in the free apps and a slightly more involved route for if you want to buy the premium apps. Now you've got no excuse for missing out on these quality titles.