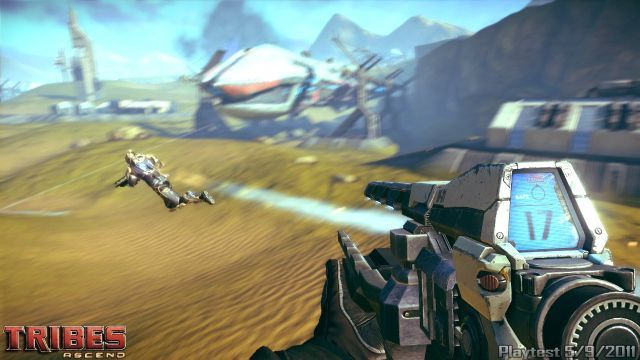 In late 1998, the now defunct Dynamix Software released Starsiege Tribes to an unsuspecting gaming public. The game had not gotten a lot of hype beforehand but the reaction to fans was immediate. This was a multiplayer oriented sci-fi game that had huge outdoor levels, jetpacks, vehicles, base defenses like turrets that were powered by generators and lots of cool weapons. It helped a lot that the game allowed players to combat each other online even with a 56k modem in the days where most people didn’t have a fast broadband connection. The result was that Starsiege Tribes became a cult hit and served as a huge inspiration for other games.

Sadly the other PC games in the series didn’t fare quite as well as the original. Tribes 2, released in 2001 got hit with a lot of post release bugs. The end result was that Tribes 2 didn’t sell as well and Dynamix shut down later that year. Irrational Games attempted to create a single player oriented game in Tribes Vengeance back in 2004 but even though the game got good reviews Tribes loyalists felt the game was dumbed down to appeal to a bigger audience.

It seemed like the Tribes franchise was dead until Global Agenda developer Hi-Rez Studios announced in 2010 that it had acquired the IP and planned to release a first person shooter MMO called Tribes Universe. In 2011 Hi-Rez announced plans to release a more traditional multiplayer shooter game, Tribes Ascend, ahead of Tribes Universe. At QuakeCon 2011 this week the game was shown for the first time in public and we got a chance to sit in on a multiplayer match.

Fans of the original Tribes will be pleased to learn that in terms of the art style, Tribes Ascend certainly looks like a Tribes game. The armor, the vehicles, the base designs and the levels all look and feel like this is a graphical update of the original game. Playing the game itself also feels like coming home in a way. The levels in the two maps that Hi-Res brought to QuakeCon are massive and will take even a quick moving Tribes character a couple of minutes to go through. They also have some interesting new visual features. One of the maps shows both small and massive ships flying around up in the sky. They were just there for effect but it made the gameplay world feel more alive than having just the player characters flying around.

The game we played was Capture the Flag and the minute we started the match we felt like we were back in familiar territory, and that’s a good thing. We were soon jetpacking into battle and skiing down sloops with great speed. We were dealing with flying vehicles and defensive turrets and blowing up generators inside enemy bases. In short, this is the Tribes game that we have been waiting 13 years to play. 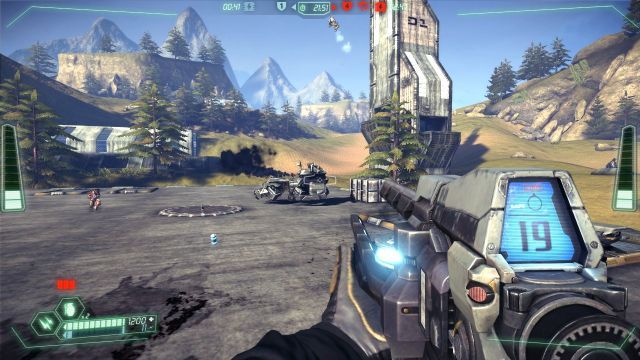 There are two big changes in this version of Tribes. One of them is the fact that instead of armor classes, Tribes Ascend will have players pick from pre-generated armor and weapons load-outs. Hi-Rez compares picking loadouts to picking which Champion you want to play in League of Legends. We don’t feel the comparison quite works; we would prefer to have at least a little more freedom in at least picking out weapons. However there seems to be enough variety in the pre-created loadouts that most players should find one that matches their gameplay style. There are fast moving but lightly armored characters along with slow moving but heavily armed and armored characters to choose from along with middle of the road loadouts.

The other big change is that when Tribes Ascend comes out later this year for the PC it will be free to play. So how will Hi-Res get money? It will sell some of its pre-created loadouts for players to use while also offering others for free on a rotating basis. We are unsure if this business model will work. Quite frankly we wouldn’t mind paying $15 up front to get all of the game’s features but that’s just us.

Our brief time in Tribes Ascend shows that Hi-Rez Studios are fans of the original and are doing their best to make the gameplay at least comparable to the first Starsiege Tribes title. It remains to be seen if fans will gravitate to the new game’s pre-created character loadouts but it’s hard to complain about being able to play a new versions of Tribes totally for free if you wanted to. We will learn more about Tribes Ascend before its released later this year.