Before there was Halo, there was Marathon. Before the Covenant, the Pfhor, and before Master Chief, there was... the Security Officer. Okay, that last one was a bit of a letdown, but seriously, in just about every way possible, Marathon was Halo before there was a Halo.

Visually, the similarities are pretty hard to miss; even though the game is a sprite-based first person shooter, you'll notice that the Security Officer's MJOLNIR Mark IV looks eerily similar to the MJOLNIR Mark V armor worn by Master Chief. Leela, an AI on the UESC Marathon - that's the name of the ship that you're tasked with defending - may not look like anything, but it's pretty obvious that she's the forebear of Cortana. The mysterious alien horde is pretty similar, too.

Like Halo, Marathon had a pretty awesome multiplayer mode for its time, pitting 8 players against one another in a networked death match, and managed to destroy countless hours of productivity in its time.

There were technical innovations, too. Marathon stood on the shoulders of Doom, but it took the first person perspective to a new level by letting the player look around more freely than anything before it by using their mouse. It surpassed Doom's 'story,' too.

Don't get me wrong; Doom was impressive for what it was, but it's best to avert your eyes when it comes to story, something that is thankfully largely absent from the game. Marathon, on the other hand, genuinely tries to immerse you in its world by rich story telling delivered in the form of intercepted communications and computer terminals.

Despite what it managed to accomplish, Marathon isn't particularly well remembered, and it honestly hasn't aged very well, either. It was a Mac game first and foremost, and anyone who owned a Mac during the 'dark times' probably has some fond memories of it. If you were one of the ten or so people unfortunate enough to own an Apple Pippin, you might also remember it as one of the few decent games for Apple's ill-fated gaming console. 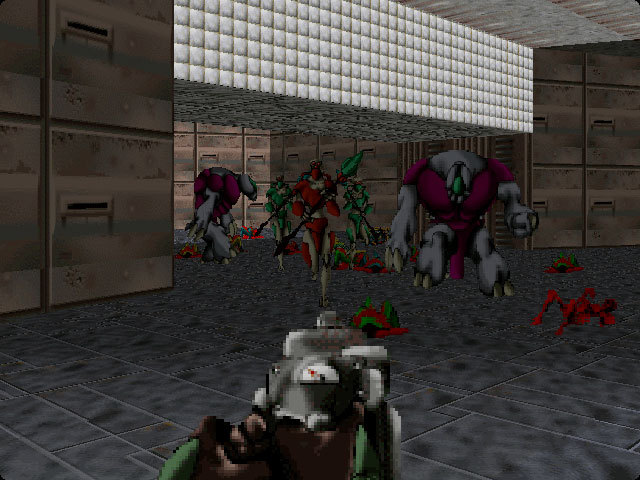 That made it all the more bitter for Steve Jobs & Co. when Microsoft snatched Bungie away shortly before the release of Halo, which is Marathon's biggest legacy to modern gamers. It also managed to generate two direct sequels which did make it to Windows, and the trilogy still has a cult fanbase and remains a popular point of discussion among Halo geeks (like us).

All in all, Marathon left a pretty big legacy without being a huge hit itself, and even though time hasn't exactly been kind to it, it's more widely available than ever thanks to the Aleph One project, an open source implementation of the engine, where it's in the enhanced iOS port, or the classic game on Mac, Windows or Linux. It's hard to call yourself a Halo fan if you've never given it a go.