Graphics? Forget about it. Sound? Not really. Story? Nope. Depth? You bet. Influence? More than you can imagine.

That's the simplest way of describing 1980's Rogue. You may well have never played Rogue, or even heard of it, but chances are you've played one of its direct descendants without even realizing it.

Games that are original enough to inspire their own genres are few and far between. Rogue is one of those games. We love to tell you how influential all the games we cover are, but seriously: we can't say it enough about this one.

In the original version of Rogue, you're thrown into a randomly generated dungeon, tasked with getting to the bottom and retrieving some ill-defined macguffin and getting out alive. Rogue wrote the book on replayability: no two games were ever the same. If you can get past the fact that you're represented by an @ symbol and orcs are just capital O's, it's still pretty fun today.

Of course, there are plenty of newer games that make the gameplay of Rogue more palatable to the modern gamer. Untold numbers of free games like Angband appeared on college mainframes (and later the internet), adding a new level of complexity to the formula. FATE brought the gameplay to casual gamers. And Diablo, of course, changed everything.

Meanwhile in Japan, Chunsoft was bringing Rogue to consoles by putting a roguelike* spin on classic franchises like Dragon Quest and Final Fantasy with the Mystery Dungeon series. Bethesda Software liberally borrowed Rogue's randomized gameplay and turned it on its head by introducing a 3D, first person interface in The Elder Scrolls II: Daggerfall. 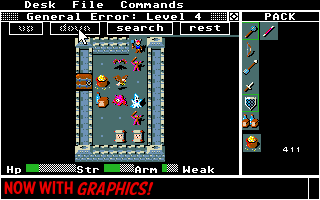 Today, of course, Rogue is still alive and well. Although only the geekiest of geeks (i.e. the author) are still playing the original, Rogue's myriad descendents are still played and loved by a wider audience than ever before, even if they don't know the history behind the games they're playing.

We'd like to invite you to get a taste of roguelike gaming if you haven't already, so we've put together a selection of free and not so free games for a variety of platforms, from your browser to your phone. So go ahead, take a walk down memory lane for a few minutes, or get engrossed in something a bit more polished...


* Roguelike: any game influenced by Rogue