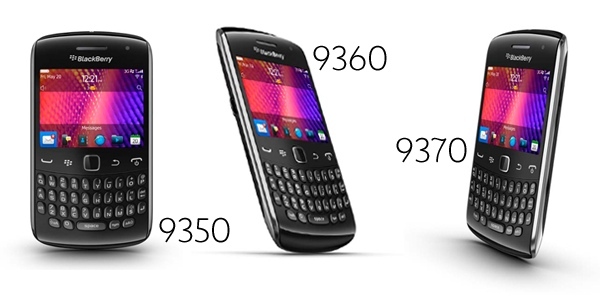 Today, RIM announced an update to the ever-popular BlackBerry Curve range. The entry-level phones will be joined now by the Curve 9350, Curve 9360, and Curve 9370. The phones all feature RIM's new BlackBerry 7 OS update, providing improved HTML5 support and faster navigation.

In a blog post earlier today, RIM's Douglas Soltys outlined the key features of the new additions. Along with the OS update, the phones all use Near Field Communication, which can be used to communicate quicker with nearby phones and accessories. Keeping its target audience in mind, the phones also have an updated version of the Social Feeds app, which integrates your Twitter, Facebook and BBM feeds into one single app. New features include custom feed views, as well as a universal search function.

The phones themselves are claimed to be "some of the lightest BlackBerry smartphones ever", at a mere 99 grams. A "windfall" design that curves the front and back into each other at the base was taken from the BlackBerry Torch, and the "soft-touch band" surrounding the phone should make the phones durable and less susceptible to breaking from drops.

Although specific dates are uncertain, RIM says the new BlackBerrys will be available in Canada sometime this month. After that, selected networks will receive them at some point in September. Officials are remaining tight-lipped on which countries will be receiving them, but judging by the success of the Curve range so far, the phones are unlikely to be avoiding many shores for too long.