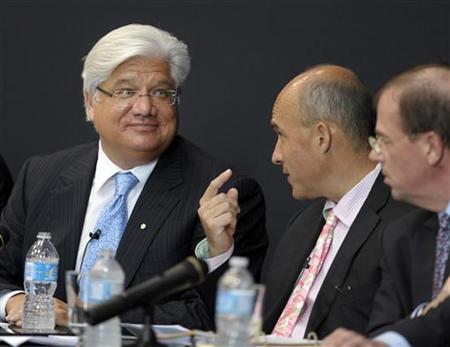 This week RIM is holding its Annual Shareholders Meeting at the company's Waterloo, Ontario based headquarters. Last month, Northwest Ethical Investments LP, a major RIM shareholder, proposed to remove the title of chairman from current co-CEO's Jim Balsillie and Mike Lazaridis. NEI believed that there was no business necessity to share the titles. During the meeting, RIM agreed to form a panel to study the effectiveness of having Lazaridis and Balsillie both have dual roles. NEI withdrew it's proposal but urged the committee come to a conclusion by the first part of 2012. John Richards, the board's independent lead director, acts in the role of a chairman and ensures independent oversight, according to RIM.

It's getting clearer that investors at RIM are not happy with the direction that the company is headed and they want a change. As Android and iOS phones start to outsell Blackberry devices, they question that Jim Balsillie's line of "just you wait" really holds any promise at all. It's been rumored that RIM shelved plans for a 10 inch version of its Playbook tablet in hopes to roll out its first QNX based smartphones even sooner. While Research In Motion is shipping more Blackberries than they ever have worldwide, every day they are losing more market share on their own home turf. Most agree that there is very strong promise in QNX if they can get it on smartphones in time but for many users switching to Android and iOS, that time has already passed.