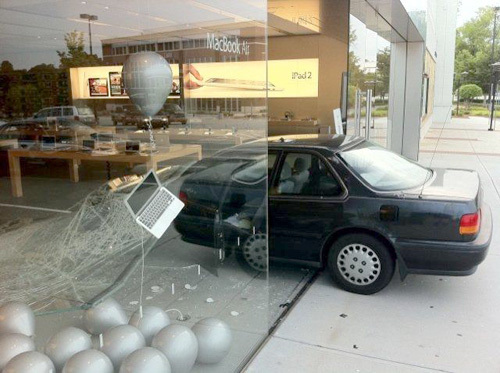 You may have read earlier this weekend that some pranksters defaced an Apple store in Hamburg, Germany with a Windows logo. Well, someone else decided to do some unplanned changes to another Apple store over the weekend and this time the results were not nearly as funny. According to MacNN.com, a person with the intentions to steal from an Apple store in Greensboro, North Carolina drove a car into the glass entrance of that store on Friday morning.

The report states that the robber drove a  "dark gray Honda" and "intentionally plowed through the store's glass facade." Despite the attempt, the robber didn't actually steal anything from the Apple store although the damage suffered as a result to the store itself is certainly very costly. There's no word if the person who crashed the car has been arrested yet.

The article points out that the stylish glass structures that are a hallmark of Apple stores seem to attract more than the normal share of criminals, with the article saying, "The stores have been hit by a growing number of robberies, many of which are smash-and-grabs in which the thieves quickly escape." It doesn't help that Apple products such as the iPad 2 are highly popular and as a result are a big target for robberies. Sometime the robberies can turn violent. Last March, an attempted robbery of an Apple store located in Chula Vista, California resulted in one of the store's security guards shooting and killing one of the robbery suspects.