The long rumored Droid 2 has been the source of speculation for quite a while now. However, if the latest rumors are true, that may soon be coming to an end. The Droid 2 may be soft launching on August 12. The Droid 2 (not to be confused with the Droid X) is the true successor to the original Droid.

SlashGear reports that the Droid 2 will feature 8 GB of flash memory, an 8 GB microSD card, and an 8 Megapixel camera. According to Engadget, “We're hearing from a trusted source that the thoroughly-leaked Motorola Droid 2 for Verizon will be launching on August 12 -- although it seems to be something of a soft launch, because marketing efforts aren't scheduled to kick in until a week and a half later on the 23rd.” 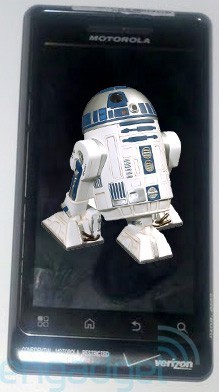 There is also another, more interesting bit of information. If the rumors are well founded, we will be seeing a Star Wars edition of the Droid 2 which will sport a white R2-D2 image on the back of the phone. While this may seem new to the Droid line of phones, it has actually been tied to the Star Wars franchise ever since the first Droid was launched by Motorola. The company had to acquire the rights to the Droid name from Lucasfilm because the name “Droid” is a registered trademark of Lucasfilm.

One piece of information still has yet to be disclosed, being whether or not the special edition of the phone (if it exists) will launch at the same time as the plain Droid 2 version.