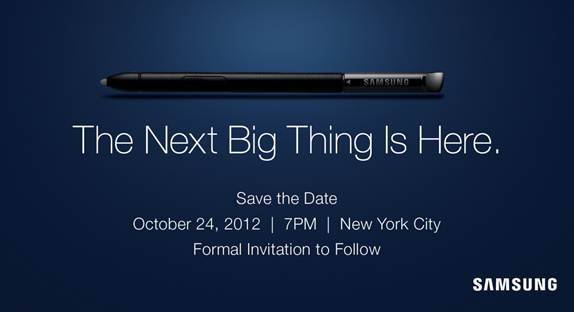 New York City has been the setting for many tech-themed press events in September, and that will apparently continue in October. Microsoft is already given notice it will hold a Windows 8 launch event on October 25th, one day before the actual launch of the operating system.

Today, Neowin received an invite for yet another press event in NYC, this time on October 24th. The invite comes from Samsung, which used its "The Next Big Thing Is Here" slogan that it has been using in recent TV ads that pit the Samsung Galaxy S III against the iPhone 5.

The image also shows what looks like the S-Pen stylus, which may be a big clue that the device is the Samsung Galaxy Note 2. The Android 4.0-based Galaxy Note 2 is also supposed to have a a 1.6GHz quad-core CPU, 2 GB of RAM, an eight megapixel rear camera, a 1.8-megapixel front facing camera and more. It will launch with 16 GB, 32 GB, and 64 GB versions.

It's also possible that the event could be for a Windows 8 based tablet. Samsung has previously announced plans to release ATIV-branded tablets in late August, which will also come with the S-Pen stylus.