Another day, another Samsung device launch. This time, the South Korean tech giant has revealed that it is partnering with Barnes & Noble, the largest book retailer in the United States, to make yet another addition to its Galaxy device line-up.

Today, the two companies jointly announced the Galaxy Tab 4 NOOK (and NOOK must be written in capital letters, perhaps indicating that it must be shouted when spoken aloud). The 7-inch tablet will launch in the US in early August, and will be sold alongside the NOOK GlowLight e-reader at Barnes & Noble stores and via its website.

The Samsung tablet will include NOOK software that will provide access to the company’s collection of over three million books, along with various magazines and newspapers. Other than that, it seems that there is nothing at all different between the new Galaxy Tab 4 NOOK and the standard Galaxy Tab 4, which features a 7-inch 1280x800px display, 1.2 GHz quad-core processor, 1.5GB of RAM and 8GB of onboard storage. 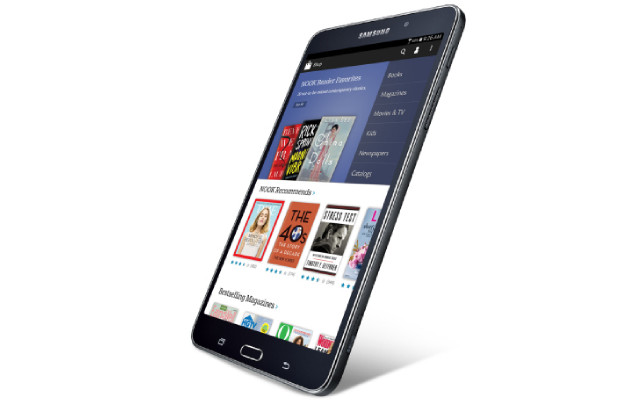 The press release announcing this device includes some fluff about the tablet being “tailored to the needs” of Barnes & Noble customers. However, we would be utterly flabbergasted, frankly, if this amounted to anything more significant than a pre-installed NOOK app, which can of course be downloaded and installed on any Android tablet with access to the Google Play store.

In fact, the press release more or less gives the game away on the real reason behind this partnership. Barnes & Noble realised last year that developing and creating low-cost hardware is an expensive business, and after initially saying it would end production of its own tablets, and then deciding that it would keep design of its tablets in house while outsourcing production, it more or less admitted defeat with deep cuts to its hardware team earlier this year.

Barnes and Noble said today that "working with Samsung on co-branded tablets with allow the Company to reduce its exposure to the substantial cost structure and other financial commitments that accompany ownership of the hardware production aspects of the NOOK tablet business."

Amusingly, Microsoft owns 17.6% of NOOK Media, which was spun off by Barnes & Noble to manage its Digital and College businesses in 2012. With Microsoft producing Android phones since its takeover of Nokia, it seems strangely fitting that the company is now involved with Android tablets too.