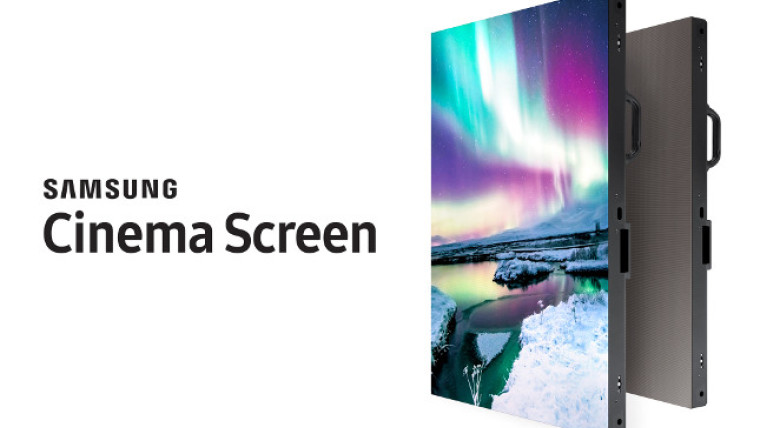 After unveiling its 2017 line-up of consumer QLED TVs in mid-March, Samsung has now revealed a brand new offering dubbed Samsung Cinema Screen, aimed at use in cinemas as a potential replacement for conventional projector systems.

In the press release, the firm argues that their 4K High Dynamic Range LED theatre screen comfortably exceeds the DCI digital cinema specifications. It must be said however that Samsung's Cinema Screen is still undergoing the DCI certification processes. With that in mind, Samsung still believes that the screen will offer a better viewing experience than is currently possible with projection-based cinema, primarily because the 4K system is directly lit and so it will not be vulnerable to the same distortions that a projector is.

According to Samsung, the direct-lit LED technology used gives a ten times brighter picture than standard projectors (146 fL as opposed to 14fL). When referencing the screen's other capabilities, the company points out the:

[...] highly accurate and superior color presentation that will capture the viewer’s eye. Complementary ultra-contrast and low tone grayscale settings enable the screen to showcase both brightest colors and the deepest blacks at a nearly infinity:1 contrast ratio.

Not stopping just at trying to win the image experience, they have announced that the Samsung Audio Lab wil be collaborating with the recently acquired Harman Professional Solutions' Cinema Group to come up with an equally impressive sound innovation for cinema. With this combined effort Samsung is really pushing to dominate the complete audio and visual experience of the cinema.

If you are able to fit this TV in your house, don't be too eager to go out and buy it, since a price for the Cinema Screen has yet to be announced. What we do know from the latest line of giant and curved televisions from Samsung is that the 88-inch Q9 (the biggest in the lineup), which they unveiled earlier this year, will set you back around $30,000 Australian Dollars (about $23,000 USD). Your guess is as good as ours as to how much the 34-foot Samsung Cinema Screen will cost.