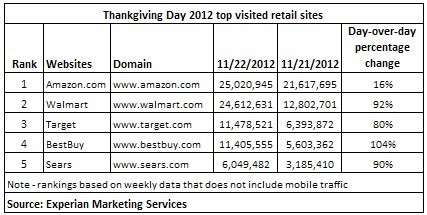 While there's been a lot of attention paid to retail sales for Black Friday, it appears that online shoppers wanted to get a head start on Thursday, otherwise known as Thanksgiving Day in the U.S. New data from a number of sources show that visits to retail websites were significantly up on Thanksgiving Day.

Experian reports, "Thanksgiving Day online traffic increased 71% in 2012 versus 2011  as the top 500 retail sites received more than 181 million total US visits." As expected, Amazon.com was the most popular retail website on Thanksgiving Day, but Walmart.com was actually a close second, with a 92 percent increase in website traffic compared to the previous day. Target, Best Buy and Sears filled out the rest of the top five and all showed big increases in site visits.

PayPal's blog also reports it saw a massive 173 percent increase in mobile payments from its service on Thanksgiving compared to a year ago, along with a 164 percent increase in its global customers on its mobile site. That shows that there's a lot more interest in customers in shopping via their smartphone or tablet products.

It will be interesting to see what the online sales data for Black Friday turns out to be, along with the upcoming Cyber Monday event.