While Microsoft has been updating all of its Skype versions constantly, including most recently its Android app, the original Windows desktop client has not had a major change in its user interface in some time. This week, a Neowin reader claims he got an unexpected update to his Skype client that contained a new chat UI for the VoIP program. 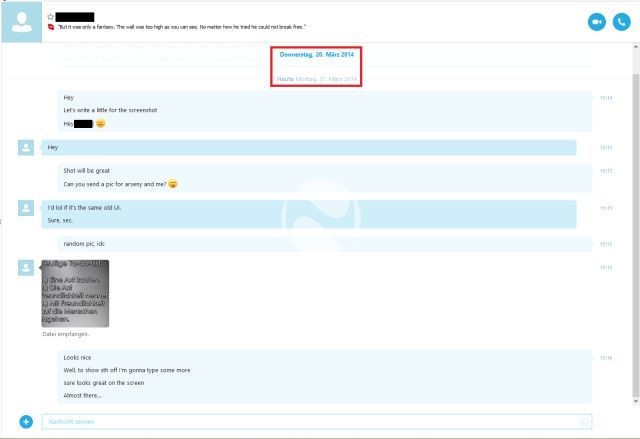 Our tipster "Marvin" told us that while he has "no idea" how he got the update, the final result was that the chat interface now looks a lot different. Indeed, the screenshot that he sent to us, shown above, resembles the Modern UI found in the Windows 8 version of Skype. In addition, there appears to be new video and audio icons on the right side of the screen, compared to the older versions that are found on the left side of the current Skype client.

"Marvin" also told us in a subsequent email, " ... the chat pane is now right while making a call, the call background is flatter and the panel shown when Skype is inactive is now grey." Unless this is a elaborate hoax, it would appear that "Marvin" accidentally got a version of Skype for Windows that was not supposed to be publicly released yet. We have contacted Microsoft to see if they wish to comment.

Update: A Microsoft spokesperson sent us this statement: "It is important for us to test, evaluate and learn from feedback when introducing new functionality. We regularly conduct gradual feature releases in preview so that we can learn from a smaller user base."

Thanks again to Marvin for the tip!