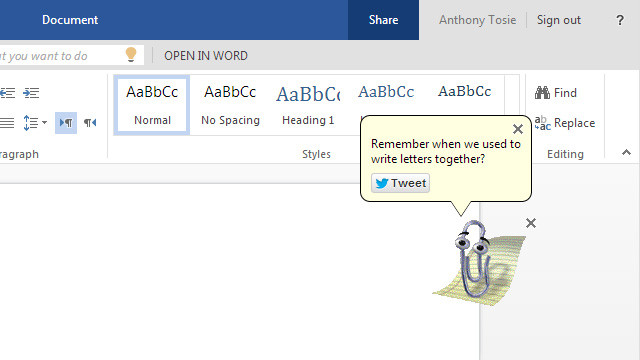 Now, however, Clippy has returned from his life of meaningless paper-holding for a final hoorah on Office Online. Unfortunately, Clippy appears to have become relatively useless in his old age, unable to tell you how to write a letter. Instead, he just fondly remembers the old days and begs you to send out a tweet on his behalf.

Though Nadella tweeted a denial Clippy's return last week, it appears Microsoft even has bigger plans for him, including a new physical version.

Microsoft describes Smarty Clippy as "the one paperclip for everything in your life," and the metallic office organizer himself states his happiness in "going back to basics and doing what paper clips like me are born to do: Attach things to other things.” The blog post announcing the new version features several images touting his features, including the fact that he's compatible with older workstations and can be reconfigured to meet user needs.