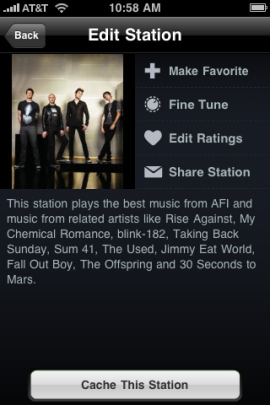 AT&T recently changed their data plan structure by limiting the amount of data a new iPhone user can consume each month. The cheapest plan allows for just 200MB per month which can be very limiting if you want to enjoy all the Internet has to offer. Thankfully some app makers are watching out for their iPhone users, they are adding features to help reduce the amount of 3G bandwidth they consume.

Slacker has released an update to their iPhone app to help out those who are watching their bandwidth consumption closely. They have now added station caching on the iPhone; the feature has been available on the Blackberry and Android since February. According to cnet, the iPhone app will cache 100 songs initially, but as you listen to those stations, the app will start to download more songs to the cached station, to a maximum of 500 songs.

The station caching will help iPhone users conserve bandwidth by allowing them to cache their radio station using a Wifi connection and then listening to it on the go without having to consume any of their mobile bandwidth.

The iPhone app is free to download and use but to take advantage of the station caching you have to get a Slacker Plus subscription which is $4.99 per month or if you pay for the year it is just $47.88 which is $3.99 per month.