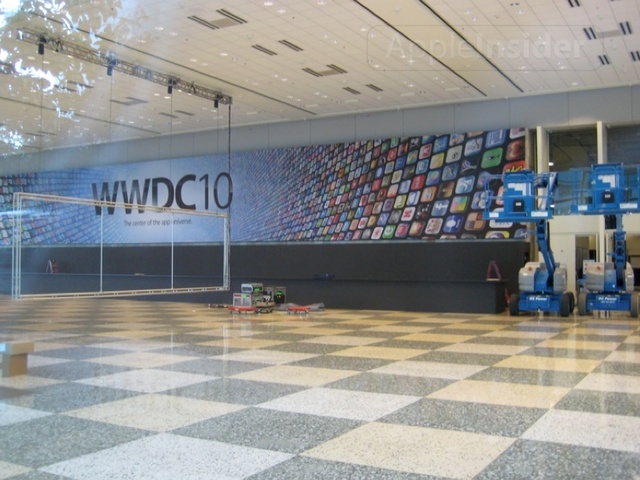 Nothing like cherry pickers and the smell of fresh adhesive in the morning as Apple's World Wide Developer conference is upon us. Banners are up, the carpet is out; the Moscone Center in San Francisco has been branded and is ready for the Apple event of the year.

This is the year of the iDevice with nary a mention of Mac OS X 10.7, prominent banners touting WWDC 2010 as the "Center of the App Universe" have been photographed by AppleInsider. The always anticipated Keynote by Apple CEO Steve Jobs is set to kickoff the event at 10am PCT on Monday. As always, WWDC 2010 is expected to be the blockbuster event of the summer with the much anticipated launch of not only previously leaked iPhone 4G but, a reworked Apple TV, and even a much awaited Mac Pro refresh. On the software side, iPhone OS 4.0 is expected along with new cloud-based media software as well as social-networking and the official launch of Apple's new iAds advertising scheme.

iPhone OS 4.0: Apple is expected to discuss iPhone OS 4.0, which it announced on April 8th 2010. Incorporating multi-tasking, folders and unified mail, the weekly SDK releases have stopped recently which points to a potential "big feature" to be released at WWDC. According to PCWorld, recent references to iChat have been found, which has been a much awaited feature on iPhone.

Cloud-based iTunes: Almost 6 months ago, Apple purchased lala.com, a Spotify-like service which provides music-streaming. It is rumoured that Apple is rebranding the service and will market it as a cloud-based portion of iTunes, with the possibility of iDevice streaming as well.

Game Center: PCWorld is also expecting some clarification on this announced social network, which is an XBox LIVE-like service for iPhone OS 4.0. Featuring matchmaking and achievements, Apple is anticipated to devote some Keynote time to a demo as this feature may be a competitor to current social network, OpenFeint.

iAds: According to Steve Jobs, current ads on iPhone "suck". Neowin has very thoroughly reported that Apple should be releasing iAds in time to coincide with iPhone OS 4.0, and will rely heavily on HTML5 and opening in-App.

Free Mobile Me: Our friends over at TheTechUpdate seem to think Mobile Me is going free, or at least will support a free version.

Apple TV: As previously reported by Neowin, Apple should be unveiling a new Apple TV soon. Speculation is still rampant as to whether this will be at WWDC or another event.

Mac Pro: Being last updated in March of 2009, MacRumors suggests that the Mac Pro is due for a revision, including some tasty 6-core Xeon processors.

Macbook Air: Gizmodo is under the impression that a new Macbook Air is forthcoming. This is possible, but a gut-feeling and sales figures tell me that the Air might be let out of the balloon.

The features of the new iPhone have been covered at length, especially with Gizmodo's perennially stickied saga of the leaked prototype so we won't get into them here. This is pretty much a 100% for WWDC 2010, as WWDC is the traditional release event. Gizmodo had thought that their fiasco might cause a date push, but Apple most likely won't want to be seen bowing to external pressure. Release date however is said to be at the end of the month.

Interestingly, iPhone 4G may have video chat. As mentioned before, references to iChat have been found in recent SDK releases. This will most likely be a Wi-Fi feature, however.

It seems to be a 50/50 chance that Verizon will be releasing iPhone with the WSJ saying yes and Verizon reps saying no. On the other hand, a Best Buy employee has confirmed that Sprint is ready to support iPhone, just as soon as it finishes up with EVO. 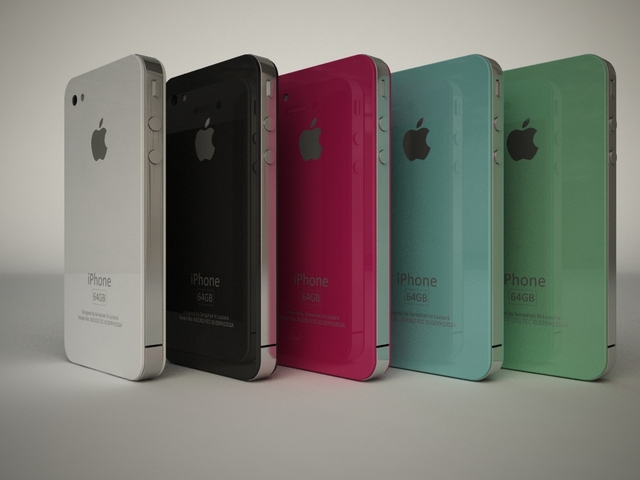 Coloured iPhones: Recently some "really cool" renderings of iPhone 4G have surfaced. An iSpazio forum user has created Nano-like coloured iPhone 4G renderings. They look pretty slick and could be something for Apple to consider. iPhone has only been available in white, black and, aluminum finishes.

Bluetooth Tethering: We all know this one will never happen, but Apple, cut us some slack. We're already throwing money at our providers, please let us use the same data plan for both devices.

And one more thing...

Steve Jobs said in an email reply that "You won't be disappointed," so hopefully Steve has something big planned for the event.

French website, MacGeneration has acquired what looks to be the release notes for Safari 5. According to MacGeneration, Safari 5 will be packed with new features including: A Firefox-like smart-address bar, the option for Bing search and Safari Reader. The "release notes" below. 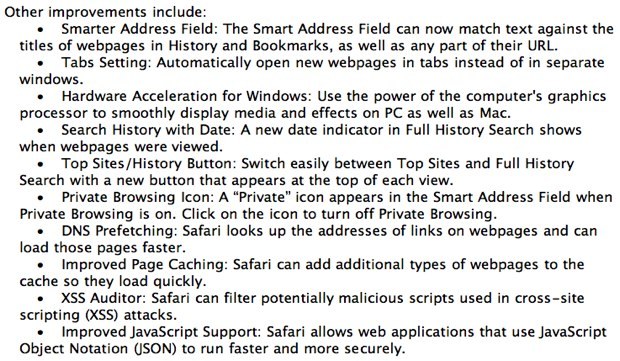 MacGeneration also reports that 10.6.4 could be due for WWDC.