Earlier today, Microsoft announced that it will begin using the name OneDrive for its cloud storage service, which will take the place of SkyDrive.  Technically, the name change has yet to take place but it appears that Microsoft is trying to throw in some extra storage space for a few SkyDrive owners ahead of the transition to the new OneDrive brand.

According to messages from a number of Neowin forum members today, they received emails from Microsoft stating they were a "valued" member of SkyDrive and as such were a part of a select few that would be given an extra 20GB of storage space on their accounts for one year. That's on top of their 7 GB of free space that's given to every SkyDrive member. 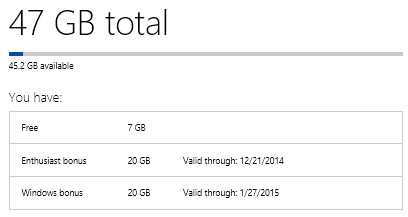 You may remember that in December, some Windows Phone owners were also given 20GB of free SkyDrive space for one year. As it turns out, one Neowin community member, "spenser.d" got both offers so he currently has 47 GB of free space on SkyDrive to play around with. If you happen to have one of these offers in your inbox, be aware that you have until March 31st to take advantage of this latest freebie from Microsoft.