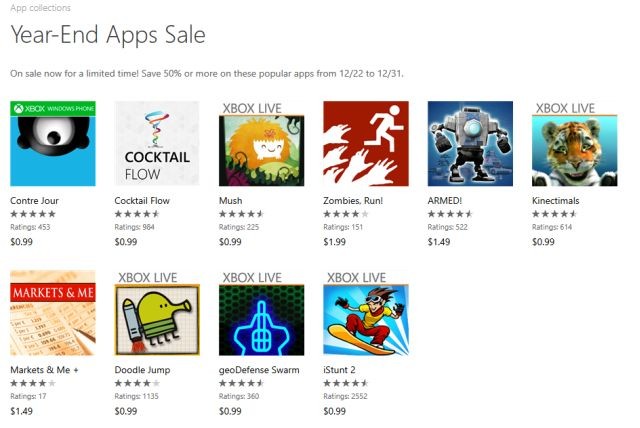 This weekend, we reported that a number of Windows 8 apps had cut their prices down to free or offered premium services for free from now until January 31st. Windows Phone owners are not left in the lurch as Microsoft has put a number of apps for its mobile OS for sale from now until December 31st.

Many of the apps that are a part of the sale are games, including Armed, the sci-fi strategy game that's normally $2.99 in the Windows Phone Store but can now be bought for $1.99 during the sales period. You will save even more on Zombies, Run!. Normally the running game costs $7.99 but for the sales period it can be yours for just $1.99. Other games that have had their price cut for the rest of the year include Contre Jour, Mush, Doodle Jump, iStunt 2 and Kinectimals, which all have a 99 cent price tag at the moment.

Two non-gaming apps have also received price cuts during the sale. One is Cocktail Flow, which lets folks create the best mixed drinks (perfect for that upcoming New Year's Eve party). You can get the app for just 99 cents compared to its normal $2.99 price. Finally, the Markets & Me app, which gives stock market followers and traders real time information on the price of their shares, is on sale for $1.49, compared to its normal $2.99 price tag.