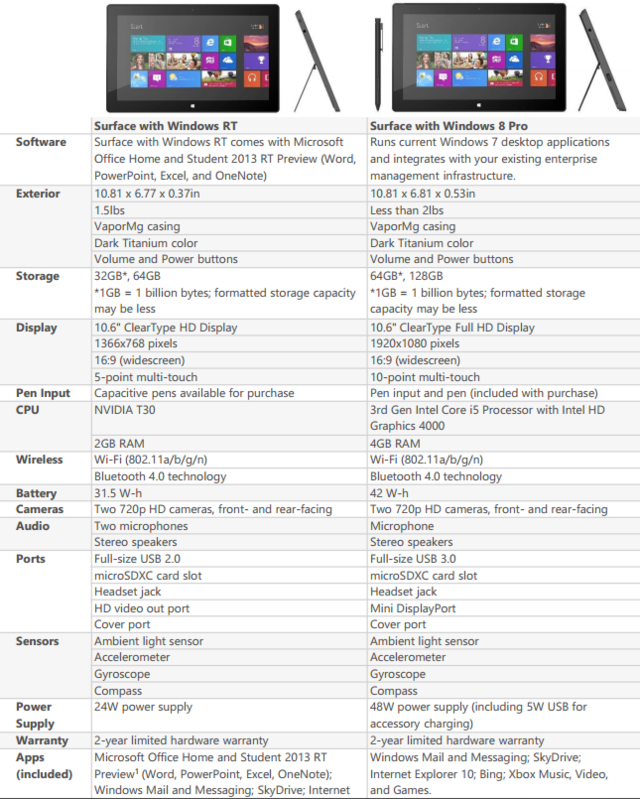 The pre-orders are open, the advertisements have been released and Surface RT is awaiting for your hard earned cash. But, if you are like many of us, you may be holding out for the Surface Pro and want to see a detailed spec breakdown between the RT and Pro version; we have the handy graphic you have been waiting to see.

The spec sheet breaks down the two tablets and will give you the best look yet at the less talked about brother of Surface RT, Surface Pro. The Surface Pro will pack under its VaporMg casing a 3rd Gen Intel Core i5 Processor with Intel HD Graphics 4000, come in 64 and 128 GB flavors, 4 GB of RAM and it will weigh less than 2 lbs.

You can also tell from the graphic above that the Surface Pro will be noticeably thicker than the RT. This shouldn't come as a major surprise as you get a lot more for your money when compared to the RT variant.

The question remains, will you jump on the RT version now or will you hold off for the Pro model?

Thanks for the tip Surface Evangelist!