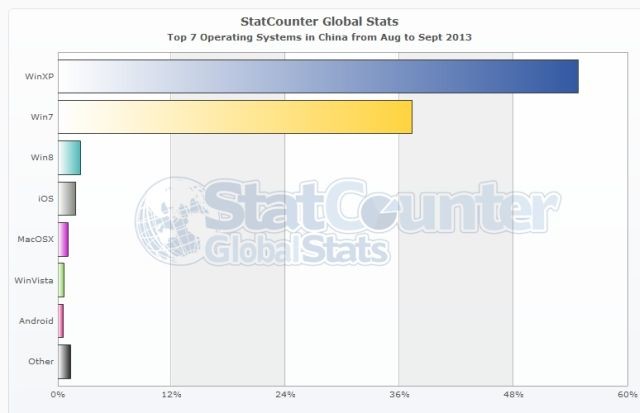 In China, Windows XP is still the number one OS with a market share of 54.79 percent, according to StatCounter.

In less than seven months, on April 8th, 2014, Microsoft will officially cut off all support, including security patches, for Windows XP, an operating system that is nearly 12 years old. However, there are still a lot of PCs that are running Windows XP around the world, and one research firm, StatCounter, has recorded eight countries and territories where Windows XP is still the number one OS.

StatCounter, which takes its data from millions of web sites around the world based on unique page views, claims that at the moment Windows XP has a market share of 20.58 percent worldwide, placing it firmly in the number two slot compared to Windows 7 at number one. StatCounter claims that OS has 51.96 percent of the worldwide OS market share.

While that's the worldwide share, StatCounter also offers information on how much operating systems are used in each country and territory across the globe. In data posted on its website, it shows the eight countries and territories where Windows XP is still the number one most used OS:

By far, the country with the biggest population that uses Windows XP the most is China, and that's possibly because it is pirated extensively in that part of the world. Indeed, in January 2011, Microsoft CEO Steve Ballmer said that nine out of 10 copies of Windows XP were pirated. It's also not a shock to see countries like Cuba and North Korea, which are cut off from much of the world in terms of trade, have high percentages of Windows XP users. 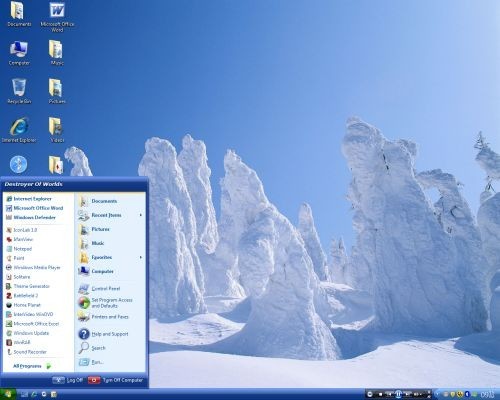 That's not the entire story, however. There are still a lot of countries that have large percentages of Windows XP owners, even if Windows 7 is number one. StatCounter's data provided us with a list of countries and territories that show Windows XP with 30 percent or higher market share but are in the number two OS slot:

Another firm, Net Applications, revealed a few weeks ago that Windows XP had 33.66 percent of the OS market share worldwide in August, according to their own data gathering methods. Neowin contacted the firm to see if they would release specific country data to us. Unfortunately we were told by a company spokesperson, Vince Vizzaccaro, that Net Applications does not allow that kind of information to be given out to the public. Vizzaccaro did confirm to us that Windows XP's market share is still on top in China.

Even if StatCounter and Net Applications' data come up with different specific figures, there's no doubt that Windows XP is still used a lot in many parts of the world and that situation may remain before April 8th, 2014 arrives.