At the Mobile World Congress in Barcelona back in February, Nokia launched an ultra-affordable handset, the 105, which it called "colourful, durable and affordable". The 105's specs were about as basic as you could expect of a modern device, with a 1.45-inch 65k colour TFT display, FM radio and flashlight – but the handset's party piece was its battery, with a standby time of up to 35 days. With a price tag of just €15 EUR ($20 USD / £12.50 GBP), that's not bad going. 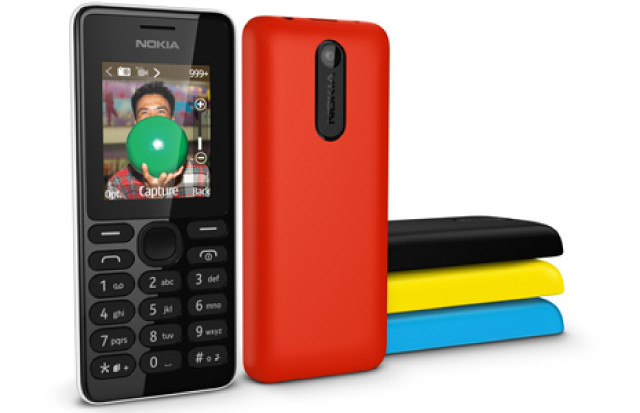 Today, Nokia has announced a successor to that device, the 108. With a price tag of just $29 USD (€21.50 EUR / £18 GBP), the new handset builds on the foundations laid by its predecessor, adding a larger 1.8-inch display, support for microSD cards up to 32GB, "Slam" content sharing via Bluetooth and, significantly, a VGA camera capable of capturing both photos and video.

It's easy to scoff at a VGA camera being built into a device in this age of 41-megapixel phone cams, but for many people in emerging markets, it presents the first opportunity to own a handset with integrated imaging capabilities. Timo Toikkanen, Nokia's executive vice president for mobile phones, said: "There remains a huge segment of the global population that has yet to own a camera phone. For the next billion people and beyond, we aim to bring new mobile experiences to ever-lower price points."

The Nokia 108 also comes in a Dual-SIM version, an important feature for low-income markets, where it is common for families to share handsets. The Dual-SIM model offers up to 25 days of standby time, while the standard version lasts up to 31 days; both offer talk time of up to 13.8 hours, with music playback time of up to 40.8 hours.

On sale before the end of the year, the 108 will launch in red, black and white, with yellow and cyan variants coming later.