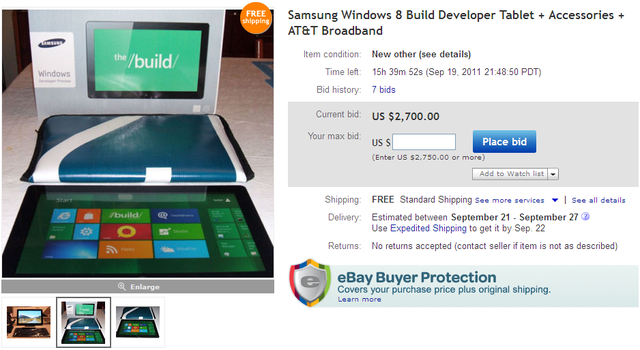 When Microsoft made the announcement that they were giving out Windows 8 tablets to developers at the BUILD conference, it was only a matter of time before some of them went up for sale on eBay.

If you absolutely must get your hands on one, you now have the option of purchasing them off of eBay; but expect to pay a hefty premium for the device. There are at least two of the devices currently up on eBay with a bid for $2700 on one of the auctions.

Neowin also got its hands on this tablet, you can read the preview here.

The tablets, while highly desired, were only issued to BUILD attendees. At this time, the tablets are not available for general public purchase, which is a shame, as they would most likely sell well considering how many individuals would love to load up Windows 8 on a tablet.

The device itself is rather intriguing, running a Core i5 cpu, 4GB of RAM, 64 GB SSD, its spec list reads more like a laptop than a tablet, which is what Microsoft had most likely intended.

When coupled with the included Bluetooth keyboard and other accessories, the tablet quickly shows that it can function as a tablet, or as a full function PC.

Thanks for the tip Faikee