In the wake of recent attacks in Beirut and Paris, messenger app Telegram has blocked 78 public channels it believes were being used by members of ISIS to communicate with each other. The Berlin-based company made the announcement today on Twitter and on its own public channel inside the app:

We were disturbed to learn that Telegram's public channels were being used by ISIS to spread their propaganda. We are carefully reviewing all reports sent to us at abuse@telegram.org and are taking appropriate action to block such channels. As a result, this week alone we blocked 78 ISIS-related channels across 12 languages. We are also introducing an easier way for our users to report objectionable public content in the upcoming update of Telegram this week. We were able to identify and block these public ISIS channels thanks to your reports. Thank you!

Here’s the rest of the announcement: 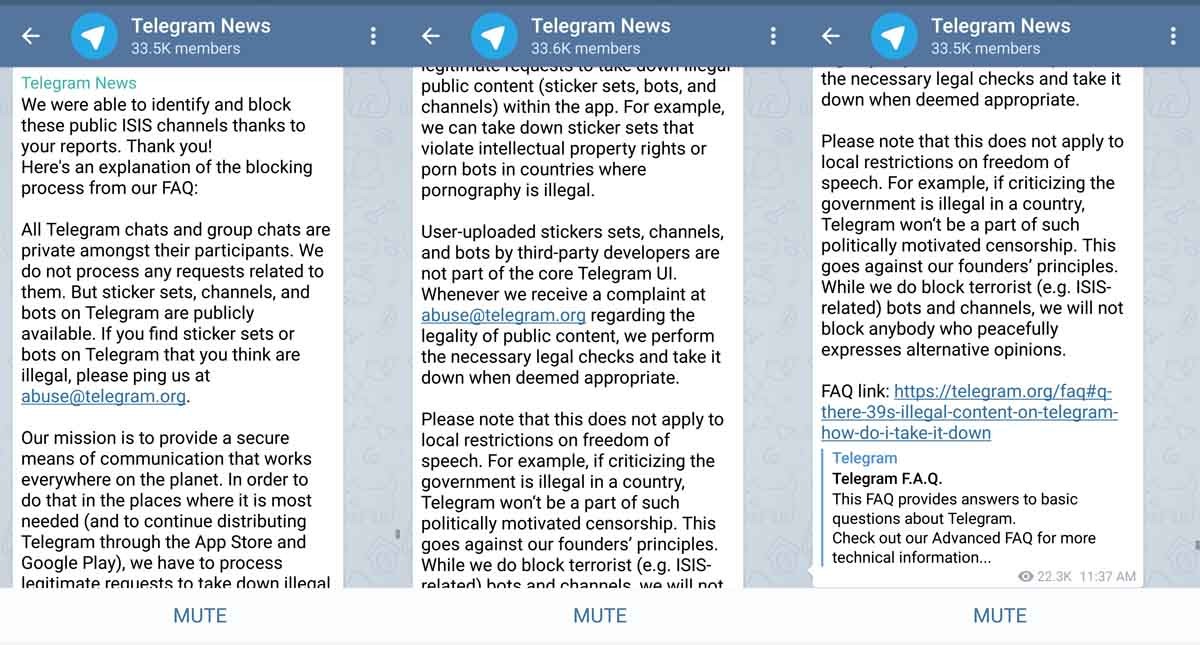 It’s important to note that Telegram is a private messenger service where conversations are private inside chats and groups; these messages are encrypted when the conversation is initiated as a “Secret Chat.” Telegram claims to not monitor or otherwise regulate what happens inside these private communications.

Channels, however, are public and are the subject of today’s announcement. Telegram noted that it will take down terrorist bots and channels, as well as pornography bots and stickers. But the company added that these rules do “… not apply to local restrictions on freedom of speech. For example, if criticizing the government is illegal in a country, Telegram won‘t be a part of such politically motivated censorship.”

Telegram's visibility has been growing recently. Last month the company announced that it has grown to 60 million active users who send 12 billion messages a day. The service supports Windows, Windows Phone, Android, iOS and Mac, as well as Firefox and Chrome.