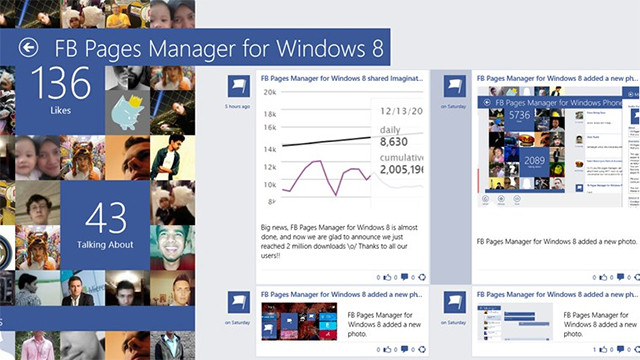 The app, which was developed by ImaginationOverflow and is available for download from the Windows Store, allows page administrators to create or delete statuses, upload photos, respond to messages, comment on posts, and reply to others' comments on the social network. Additionally, admins can monitor page statistics and do "pretty much everything on your pages that you do on your PC browser," according to the app's description. As with the official Facebook app for Windows 8.1, the Pages Manager app features a live tile with real-time notifications.

Facebook's app for Microsoft's operating system launched alongside the release of the Windows 8.1 update in October, though it didn't allow users to maintain pages. Instead, admins had to rely on a traditional browser, which could prove difficult for tablets unless a mouse was used.

The Facebook app's release for Windows 8.1 marked the first time the social network has released an app for one of Microsoft's mobile platforms, as the Facebook app for Windows Phone is developed and maintained by Microsoft. Facebook has official Page Manager apps available for both Android and iOS, and the social network also makes its user-focused apps on both platforms as well.