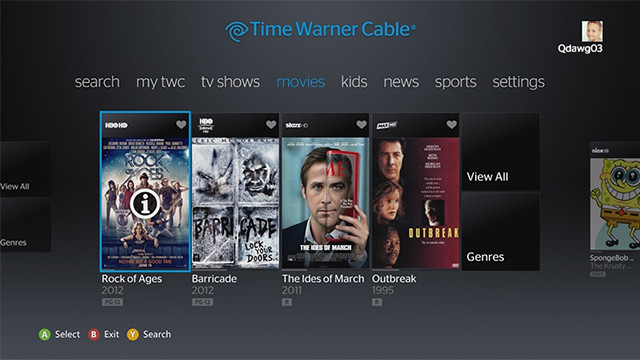 The Time Warner Cable app is now available for Xbox 360 users in the United States.

Time Warner Cable subscribers now view broadcast programming on the Xbox 360, as the company released an app for the Microsoft console on Tuesday.

Though the app currently only offers broadcast programming, Microsoft's Xbox Wire website claims on-demand programming will come to the app sometime "down the road." Subscribers of the U.S. television service provider have access to about 300 channels, which can be accessed through voice commands powered by Kinect; some of the channels available through the app include MTV, HBO, Comedy Central, AMC and FX.

As with other video streaming apps, users must subscribe to Xbox Live Gold to make use of the service. Time Warner Cable joins Verizon FiOS as the only full service providers to offer live programming through Xbox 360 apps; Comcast Xfinity also has an app for the console, though it only offers on-demand streaming. Some cable channels, such as HBO and ESPN, also provide apps for the service for users who subscribe to their respective services.