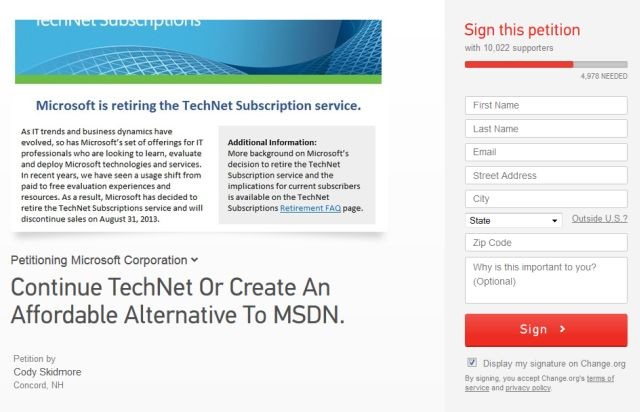 Microsoft will end new subscriptions to its TechNet software developer service in just a few days, but an online petition that was started to try and convince the company to change its mind is still taking signatures in a last ditch effort.

The petition on the Change.org site launched soon after Microsoft announced last month that it would no longer take new subscriptions to TechNet after August 31st. Today, the petition requesting Microsoft continue TechNet reached and exceeded the 10,000-signature mark. However, it's unlikely that Microsoft will change its position at the point. Neowin got a "No comment" from a Microsoft spokesperson when we contacted them about the online petition reaching the 10,000-signature level.

In its original announcement in July, Microsoft said that it has seen "a usage shift from paid to free evaluation experiences and resources" and that was a factor in retiring TechNet. While Microsoft still has the MSDN subscription service, its prices are much higher than TechNet. The Change.org petition states that Microsoft should continue TechNet or launch a cheaper alternative to MSDN. It added, "IT Professionals and ISVs need affordable access to Microsoft products normally accessed through TechNet."

Microsoft will continue to honor all current TechNet subscriptions until they conclude. People who purchase or renew their subscriptions by August 31st must fully activate them by September 30th.