Trivia Tuesday is back! After not coming out with a trivia article for just over a month, I'm back in business and ready to deliver some interesting (and probably pointless) facts about things in the tech world. This week I'm taking a look at Internet Explorer, which was once the world's favorite browser by an absolutely enormous margin.

Interesting chart: Before I dive into some facts about Internet Explorer you should check out this fantastic chart that lists various different browsers and their history. Well worth a look.

Internet Explorer was first bundled with Microsoft Plus! for Windows 95 and released in August, 1995 as version 1.0. Since then it has been updated many times right up to Internet Explorer 10 that resides within the Windows 8 Consumer Preview. 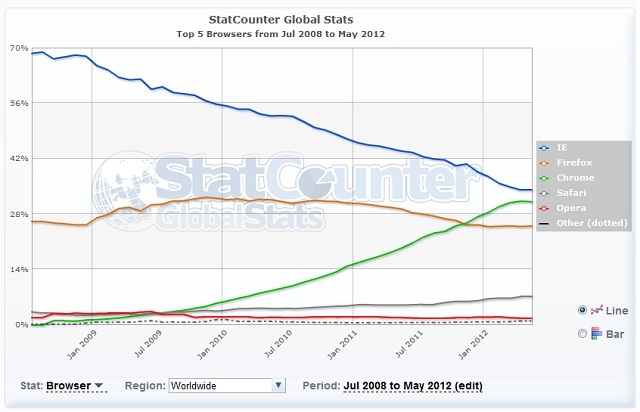 According to Wikipedia's market share history for Internet Explorer, it peaked in 2003 when it occupied a whopping 94.43% of the market, with 59% of the market using IE6. By the following year IE marketshare dropped slightly to 91.27% but IE6 had then taken 83% of the market.

Between February and April 2012 IE commanded just 34.87% of the market according to StatCounter. It's most popular in North America with 40.91% market share, and least popular in Antarctica (with all of its approximately 4000 inhabitants) with just a 14.28% share.

Internet Explorer 6's persistently high market share despite it being so ridiculously outdated prompted Microsoft Australia to compare it to 9-year-old milk in 2010. You can watch IE6 die a slow death at Microsoft's IE6 Countdown website. 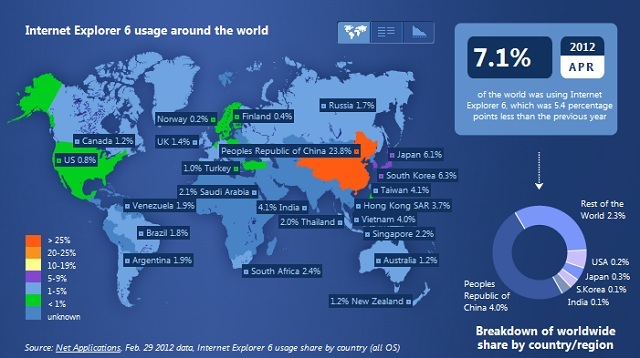 Windows 7 is the first version of Windows where Microsoft allows you to easily remove Internet Explorer without causing compatibility issues.

Easter egg: ​There is a single Easter egg in Internet Explorer (apparently), although it only works in IE4 so it's unlikely you'll be able to try it out. If you type about:mozilla into the address bar in Internet Explorer 4 it shows a solid blue page in reference to the infamous blue screen of death (BSoD).

OldApps.com has download links for all versions of IE right back to Internet Explorer 3.0 for Windows 3.1. Perhaps you can try out the Easter egg after all...

The now iconic blue "e" logo for Internet Explorer (seen above) was first introduced with IE3 back in 1996 and since then the logo has remained relatively similar.