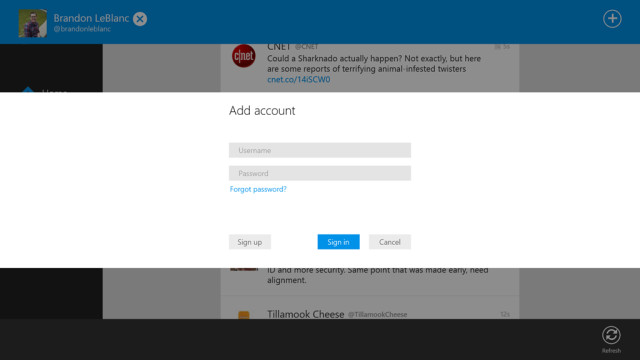 It's been several months since the official Twitter app for Windows 8 launched, but today it received a significant update. While the official listing doesn't have the new change notes yet, Microsoft has revealed more information on its own.

The Windows Experience blog states that this new version finally allows Twitter users to sign into the app with multiple accounts. Microsoft states:

To add a new account, just swipe from the top or bottom (or right-click) to bring up the app commands and click the people icon that will be at the top right. You will then see the “plus” button at the top right allowing you to add additional accounts. You will also see “x” buttons appear next to already added accounts letting you quickly delete the accounts you don’t want.

The new Twitter app for Windows 8 also includes list support. Users can now go to their own Twitter profile, or the profile of another user, and view lists. The app also now allows people to pin lists to their Windows 8 Start screen, along with any other Twitter user profile. This offers power Twitter users a way to keep better track of the lists and profiles they track the most.

Twitter has been one of the most downloaded free Windows 8 apps in the Store since its introduction in March, although there are a number of third-party Twitter clients for the OS that are still available.