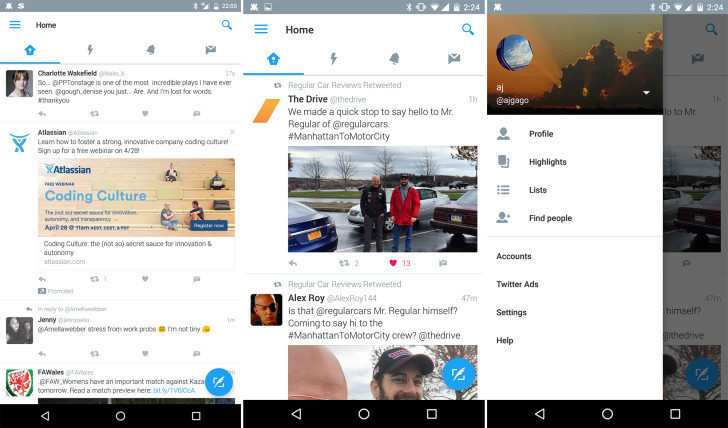 If you have Twitter on your smart phone or tablet, chances are you will soon see some changes to the social networking app. Twitter has begun to test out a new user interface (UI) via server-side switches, which includes tabs, easier navigation and a floating action button (FAB).

The new look resembles the desktop website, as tabs for your timeline, moments, notifications and messages lie across the top. In addition, a navigation menu can be brought up, which allows you to move swiftly between your profile, highlights and more. This feature will essentially replace what is known as the overflow icon (three descending dots in the upper right-hand corner of the current app).

While a FAB, which users can instantly tweet from any part of the app and on any place on the screen, was tested on the app in March of 2015, it was later removed. Moreover, an official tweet from Twitter introduced the new feature of being able to directly message any user via one of their tweets. A button can now be seen alongside the reply, retweet and like buttons.

The new Message button on iOS and Android makes it easier to send Tweets privately — here's how it works ? pic.twitter.com/UXwoRA7Pl6

These updates are not official, with updates being pushed across selected servers, with no way to acquire them manually.