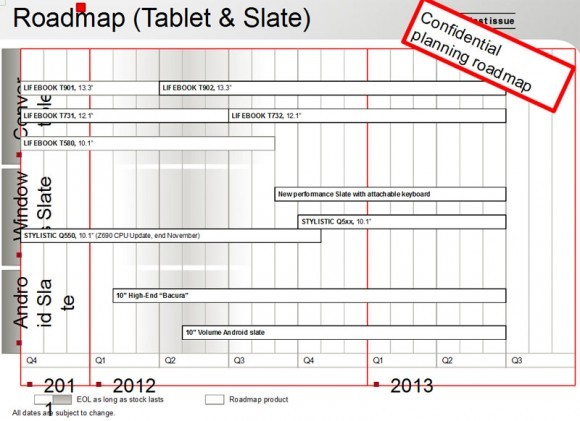 Windows 8 will almost certainly be front and center next week at the Computex trade show as lots of PC makers will be showing off upcoming desktops, notebooks, tablets and slates running on Microsoft's next operating system. One of them will be Fujitsu, at least according to a leaked roadmap of the company's product plans as posted by Slashgear.com.

One of their Windows 8 slates is labeled "STYLISTIC Q5xx" on the roadmap with a 10.1 inch display that's due out in the latter part of the third quarter of 2012. The other is called "New performance Slate with attachable keyboard" (we assume that's a working title) that's due out in the beginning of the fourth quarter. No other information about these slates have been announced.

In addition, Fujitsu has two Android tablets in the works. One is titled "10-inch High-End Bacura" on the product road map and the other is shown with the label "10-inch Volume Android slate."

Fujitsu has a number of its Lifebook-based Windows 7 notebooks that are close to release. The roadmap shows that they will include a Lifebook T902 with a 13.3 inch display, along with a smaller Lifebook T732 with a 12.1-inch display. Presumably both of these notebooks will be eligible for the Windows 8 Pro $14.99 upgrade when Microsoft starts that program up, reportedly as soon as this Saturday.