Microsoft has been doing a lot of work recently in order to best curb malware infections as much as possible. The company announced yesterday that it was blocking VBA Macros by default, just like it did to XLM macros last month. And towards the end of last year, it also began disabling MSIX AppX app installers.

When it comes to the company's in-house anti-malware solution, which is Microsoft Defender, here too, the firm has been scoring very highly in some of the recent AV-TEST results and rankings. In the October 2021 report, it came out as one of the best antivirus solutions in the market, and in the latest December 2021 rankings, it actually improved relative to some of the other popular products.

However, AV-Comparatives does not quite agree with AV-TEST's findings as per the former's 2021 Summary Report. In this report, Microsoft didn't score the full marks as it did twice on AV-TEST's last two results. Some of the others like AVG or Avast, which were outperformed by Defender in the lastest AV-TEST results have also beat Microsoft's product in this AV-Comparatives test.

Now coming to the results, while AV-TEST uses scores out of 6.0 to rate the various anti-malware solutions, AV-Comparatives deploys star ratings where:

In total, 17 products were tested and AV-Comparatives was most impressed by McAfee rewarding it the "Product of the Year 2021" Award. McAfee managed to score the full three stars except in the February-May 2021 Real-World Protection category.

Speaking of categories, the 17 products were tested for:

The image below shows the summarized result. 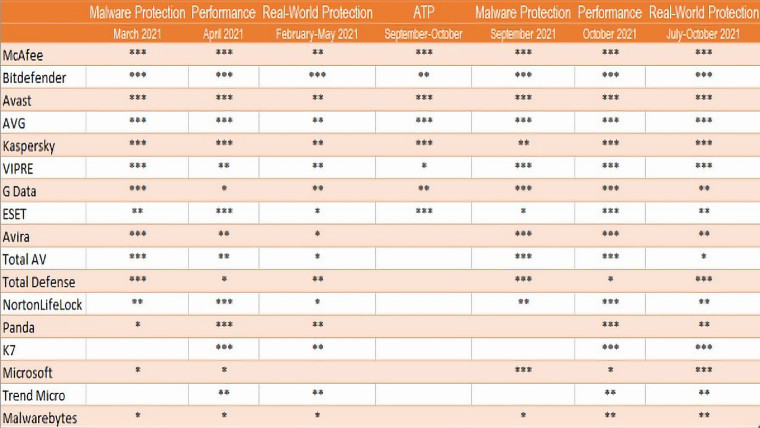 Microsoft's Defender was the only antivirus that failed to score in the Real-World Protection test for February-May 2021 due to an error. AV-Comparatives has also explained why:

Unfortunately, we cannot provide results or an award for Microsoft Defender in the February-May 2021 Real-World Protection Test. During the testing, despite being configured for automatic updates and performing manual updates, parts of Defender were not correctly updated. As there were no error messages, this issue was only discovered at the beginning of June and required a new installation of the OS.

It must be noted however that the product received the highest available rating of Advanced++ in the July-October round of tests. And malware protection was also outstanding, though, it scored low in the Performance metric which implies a system with Defender on it was impacted relatively more than ones without it.