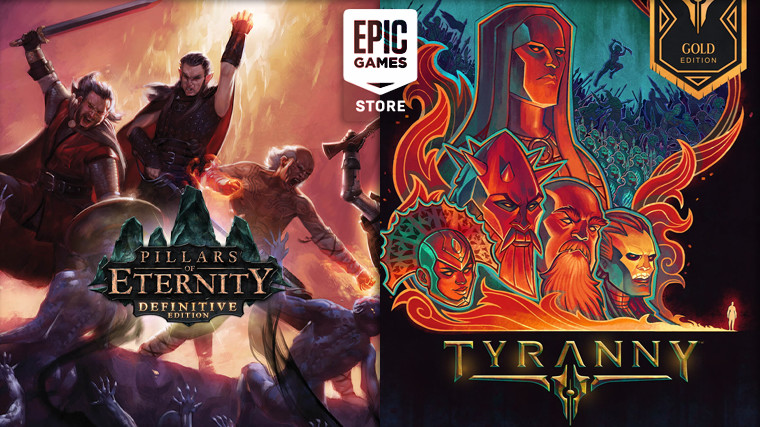 Your serving of freebies this week from the Epic Games Store has two hits developed by Obsidian Entertainment, them being Pillars of Eternity - Definitive Edition and Tyranny - Gold Edition. These are the complete editions of these games, so you will have all of their expansions and DLC content too.

Both are isometric perspective role-playing games but set in wildly different settings. Pillars of Eternity takes place in the fantasy world of Eora, where the player character and his party are investigating a soul-less infant problem involving the gods. Meanwhile, Tyranny is set in a war-ravaged fantasy world where a great evil has already conquered the world, and the player is a loyal subject of this force.

The promotion will have Pillars of Eternity and Tyranny as freebies until Thursday. As for next week, the yearly Epic Games Store Holiday Sale is returning alongside its massive daily freebies special, where the store will have a game to claim for free every day for two weeks straight starting on December 17.

The usual free events are happening this weekend too, with Squad and Project Highrise being offered as free-to-play games temporarily. The former is a tactical shooter that offers 100-player battles, on-foot and vehicular warfare, base building, and more, while the latter comes in as a skyscraper construction and management sim that has you juggling the two elements while trying to make a profit.

The Game Awards is now behind us, but the sale promotions it brought along have stayed for the weekend, offering discounts for high-profile games that have been award nominees and winners from this year and even previous events of the show.

Also, keep in mind that while a lot of EA-published games are on sale right now, the Xbox Game Pass for PC subscription holders will be gaining access to EA Play starting on December 15. With that out of the way, here are our big deals for this weekend:

If DRM-free game deals are what you're looking for, then check this one of our highlights list below:

Keep in mind that availability and pricing for deals may vary depending on the region you're in.

And that is it for our pick of this weekend's PC game deals folks, and hopefully, some of you have enough self-restraint to not add even more games to your growing backlogs this awards season. Of course, there is a large number of more deals ready and waiting all over the internet if you comb through it hard enough, so keep your eyes open for those, and have a great weekend.