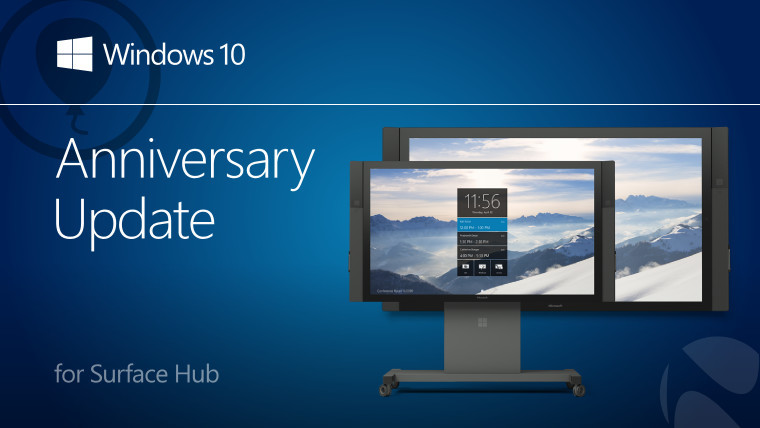 Today, Microsoft announced that the Anniversary Update is finally heading to the Surface Hub, its 55- and 84-inch touchscreens designed to boost collaboration and productivity. It will be made available to businesses and educational institutions via Windows Update from today, and the rollout should be complete by early next month.

Among the new features in the Windows 10 Team Anniversary Update for the Surface Hub, Microsoft highlighted these in its announcement today:

People love inking on Surface Hub! With this update, we are extending inking across Word, Excel and PowerPoint. This means the people can now pick up a pen to start annotating directly on their Word docs or Excel sheets on the hub. We’ve also added a “Draw” toolbar in the ribbon with a variety of inking tools.

Support for simultaneous Pen and Touch

Now people can use both hands to edit content on the fly, or use a mixture of pen and touch when multiple people are collaborating with the Surface Hub. This is possible even while several apps are open simultaneously.

Save & Recall Whiteboards directly through OneDrive

One of the most loved features of Surface Hub is the ability to send whiteboards to meeting participants via e-mail as image or OneNote file. Now, we’ve added the ability to sign in, to save and recall Whiteboards directly from OneDrive. This helps people pick up right where their last meeting ended with a simple and secure sign-in experience.

We’ve added support for third-party peripherals to offer choice and flexibility in audio, video and microphone configuration. Our Surface Hub and Skype for Business engineering teams have successfully tested the following devices. We will continue testing across our partner portfolio in the upcoming months to confirm additional peripherals.

Further details can be found on the Surface Hub update history page.