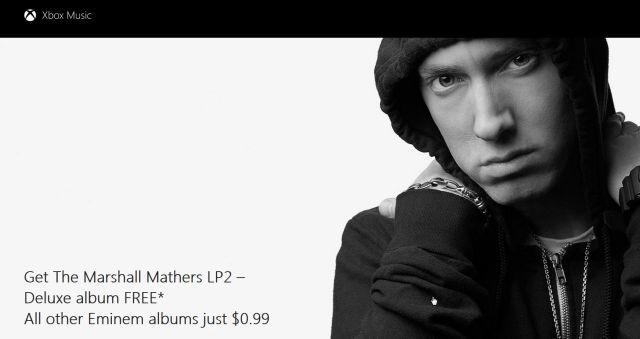 Microsoft is giving Windows 8 and Windows Phone users of Xbox Music a nice Cyber Monday freebie, if they happen to be into rap music. The company has announced that for today only, the latest album from Eminem, Marshall Mathers LP2, can be downloaded from Xbox Music for free from those two platforms.

Major Nelson has the details on how to get the album for free. In addition, all of Eminem's other digital CDs can be purchased and downloaded on Xbox Music for 99 cents each on Windows 8 and Windows Phone, again just for today; the recently launched Xbox Music website is also streaming all of his albums for free today. By the way, the album is the Deluxe edition with some additional content, and is available to download in both Explicit and Edited versions.

One interesting tidbit from Microsoft is that Eminem "has been the #1 artist on Xbox Music" over the past few years, although specific sales numbers were not revealed. Offering a free album, along with deep price cuts on his other releases, will certainly help to boost the appeal of the service.