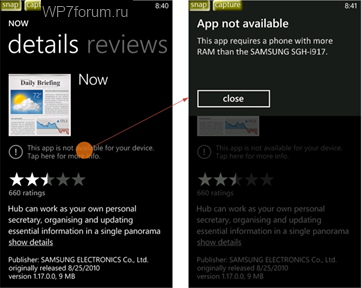 The next major update for the Windows Phone OS will be the one that has received the code name "Tango". Today a Russian web site, WP7Forum.ru, claimed to have leaked out new screenshots of the Tango upgrade along with some new information about what Windows Phone owners can expect in terms of new features.

Microsoft has yet to officially reveal what it has planned for the "Tango" release. However, a recently leaked road map claims that it will be made available on Windows Phone devices sometime in the second quarter of 2012.

The WP7Forum.ru web site says that Tango will allow Windows Phone apps to be automatically updated via Zune. It is also supposed to increase the number of pre-installed apps on new Windows Phone devices to 40 from the current 16. If you have a SIM card with a list of contacts from an older phone, the Tango update should allow for that contact list to be exported to the new Windows Phone.

If you own a Windows Phone with just 256 MB of memory, you may not be able to install some apps after the Tango update is launched. As shown in the screenshot above, the Tango upgrade may prevent some of those apps from running on those phones.