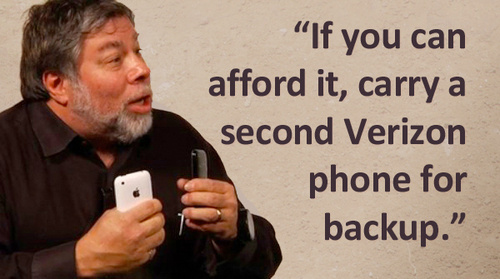 While the faithful Apple masses wait for a solution to their ongoing iPhone 4 reception woes, Apple Co-Founder and Toyota Prius Guru Steve Wozniak has devised his own solution to solving the iPhone 4 conundrum. In an interview with Dutch journalist Henk Van Ess, The Woz has stated:

The first time I tried I was able to duplicate the problem. My wife was driving me to the airport and as soon as I got a short distance from my home, and no longer on wifi, I tried it by accessing a web page (using Safari on my iPhone 4) and observing the progress bar.

I tried it again with one more web page I was in a moving car in the hills near my home. Currently I maintain cell phone calls fine there with my iPhones and with other cell phones, although this exact area used to drop AT&T calls reliably, a few years ago.

I was in a moving car in the hills near my home. Currently I maintain cell phone calls fine there with my iPhones and with other cell phones, although this exact area used to drop AT&T calls reliably, a few years ago.

I tried to repeat this experiment somewhere else a second time, I think in a San Jose restaurant, and I only had partial success. That time I could only slow the progress bar a little and only if I squeezed my iPhone 4 tightly. I concluded that the effect only occurs in some places. It’s like the AT&T dead zone has been extended with this new phone.
If you can afford it, carry a second Verizon phone for backup. Another option is to carry a Verizon mifi and rely on Skype on your iPhone.

Although this solution is a little convoluted it is very valid. If you can justify paying full price for the unlocked device, using it on another service in conjunction with a Verizon MiFi is very clever. Some users may wish to utilize the iPhone experience, and for those unwilling to switch or grin and bear it, the potential for Wi-Fi only use is there. Hopefully a solution that will satisfy Apple's margins and their many consumers is in the works, as backlash has abounded since the device's release. As iOS 4.0.1 rolls out, users have at least some hope that improvements are in development.