Wall Street analysts forecast earnings per share of $6.52 but in reality the earnings were $6.45 per share. However, Google's second-quarter revenue was $6.82 billion for the quarter, up 24% compared to last years figures. The financial community was expecting $4.99 billion in revenue for the quarter and Google announced it took $5.1 billion in the quarter. Although revenue was solid, the FT reports "a burst of higher spending in the first quarter, which saw Google return to aggressive hiring, had put Wall Street on alert about the prospects for profit margins."

Reactions to the earnings announcements focus heavily on the negatives. The profit per share missed estimate is partly due to the average cost per click on Google ads which increased only 4% in the last year, less than analysts predicted. Google's shares dropped 4% in after-market trading as investors reacted to the announcement. The web giants share price has slipped 18.5% in the past three months.

“Google had a strong second quarter,” said Eric Schmidt, CEO of Google. “Solid growth in our core business and very strong growth in our emerging businesses drove 24% revenue growth year over year. We saw strength in every major product area, as more and more traditional brand advertisers embraced search advertising and as large advertisers increasingly ran integrated campaigns across search, display, and mobile. We feel confident about our future, and plan to continue to invest aggressively in our core areas of strategic focus.” 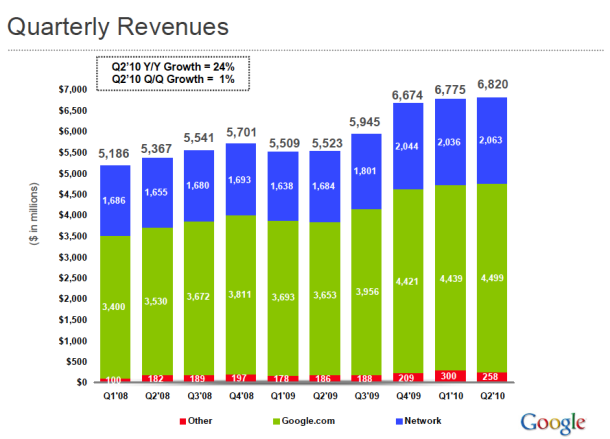