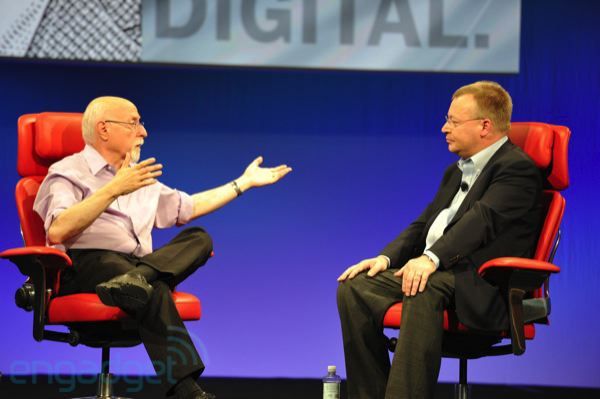 Today at All Things D, shortly after the Windows 8 announcements, the Nokia CEO -- Stephen Elop -- took the stage to talk about their company and future with Windows Phone 7, alot more publically than they previously have.

Nokia admits that Symbian has been slow, and the reason the company shifted to Windows Phone was because it would help them keep up with their competitors much faster, rather than developing in house. He said that Symbian is a "bit crufty and takes too long to change." Originally Nokia was going to move to MeeGo, but looked at WP7 and Android too, and decided that Windows Phone 7 would allow them to achieve their goals in a third of the time it would take to achieve with Symbian.

Elop pointed out that Nokia went with Windows Phone as it allowed them to differentiate themselves, even moreso than with Android. He finally has come out and said that "We will not do something on our WP7 phones that won't work on other WP7 phones -- it's a philosophy for success." He also said that Nokia will remain in possession of their hardware business.

When prompted about tablet PC's, Stephen said that he wasn't going to announce a tablet today, but "as a high level point, there's a connected digital experience will increasingly define what consumers are looking for. It's important for us to play across that space. We have to address that whole space." It sounds like we'll see a Nokia tablet sometime in the future.

Nokia says that their first Windows Phone will ship in the fourth quarter of this year, which lines up with what Microsoft said at the Mango event last week. They will not be showing off any devices in the near future.

​Live Coverage thanks to Engadget