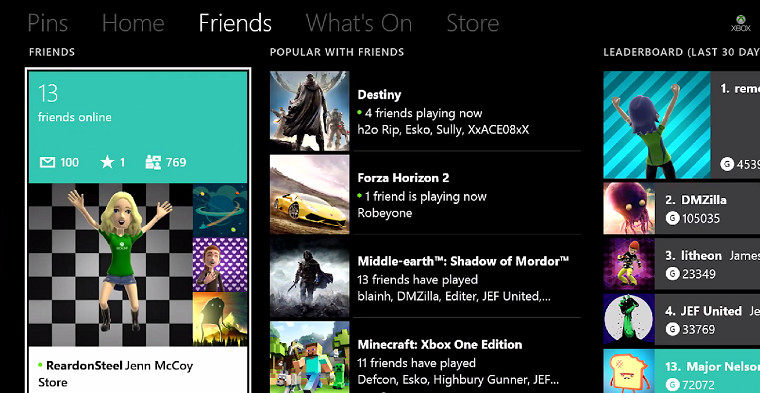 The Xbox One has been getting monthly updates that have added features and improved performance in a number of ways. Of course October is no exception to that and the new Xbox update is now rolling out to all users.

The October update is one of the biggest - or, perhaps, the most visibly obvious - update that the Xbox One has received since launch. It’s also the first iteration of the console’s OS where users will notice significant UI changes.

The most obvious feature bundled in this update is the new Friends tab on the home page, which lets users quickly view what their friends are doing and who’s up for a game. It also gives the dashboard a much more complete feel, by pushing the Store and ads to the side. This feature has been in testing for a really long while so it’s nice to finally see it roll out to everyone.

Other improvements included in the October update are mostly related to Snap, which has received something of a major revamp. By double pressing the Xbox button on their controllers users will now see the new Snap Center, which lets you easily snap to one side some of the most used and useful apps such as Party and Achievements. At the same time it also allows you to easily navigate to whichever app you might want to snap without using voice commands.

Finally the update also includes support for the MKV format in the Media Player app, the expansion of OneGuide to 11 new countries, universal remote settings and other improvements in Smartglass, an updated Devices & Accessories page and the ability to hide games and apps on the console.

As noted above this is one of the biggest updates the console has received, and it’s great to see Microsoft continue to offer monthly improvements for its gaming flagship.

Next up we’ll wait and see when the new theme and customization support gets officially unveiled and when that update will hit consoles.